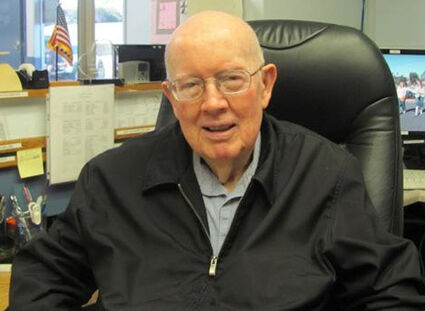 Charles Donald Luallin passed away peacefully in his home on January 12, 2022. He was predeceased by his wife Della in 2014.

"Don," as he was affectionately known by many throughout the community, will be lovingly remembered by his daughter Lorene (Bruce) Craw of Fallbrook; and his grandsons Caleb (Lahnie) Craw, Kyle (Jennifer) Craw, Jeremy (Maddy) Craw, Justin (Lisa) Craw and great-grandchildren, Cash, Chord, Jasper, Jade and Kylie.

Don grew up in El Centro, California. He was very active in high school in Madrigals and 4H. He then went into the Airforce and married Della in 1951. He worked for a Chevrolet dealership 30 plus years receiving many awards.

He then moved to Fallbrook where he started as a volunteer for the Fallbrook Food Pantry. He then became the director. He was the first paid employee. He received many awards such as the Healthcare Hero 2009, Chamber of Commerce 2013 Citizen of the Year, and U.S. House of Representatives Certificate of Special Recognition. The list goes on. He retired at 82 years old.

Don was a very sweet, humble man and a wonderful role model. He is greatly missed.

Don has requested a private family celebration. He asked that in lieu of flowers, please make a donation to the Fallbrook Food Pantry in his name. He cherished his job there.

"I feel I have done the best I can do in this life."