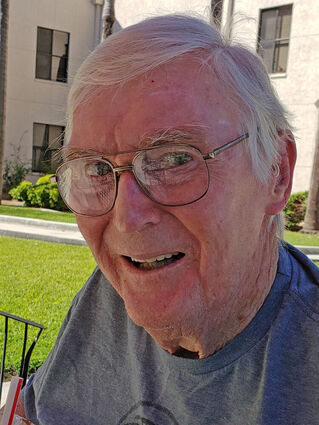 Russell Vatnsdal was born on Jan. 9, 1931, to Leslie and Dorothy Vatnsdal. Russell's mother was the daughter of a pioneer family of the Stewarts that came to Fallbrook in 1884. Russell attended schools in Fallbrook starting from the fifth grade when his father and mother had moved to Fallbrook to the small lemon ranch they had on Gum Tree Road.

In high school, he was active with sports, school band and was the Class President in his senior year. Russell was part of the football team of Fallbrook High that won the Football CIF Championship in 1948. He was part of the Shafters Car Club founding members being #9.

He continued his education at Palomar College in Vista and then went to Humboldt State before he joined the service to serve his country, finally ending up with the Air Force. After his military service, he went back to Humboldt State to finish his degree for teaching.

Russell loved to farm, having a large ranch he ran up on the North Coast of California, with sheep, apple orchard and walnut orchard. His last ranch was a vineyard in Lodi, California.

Russell and his wife Brenda moved back to Fallbrook in 1999 and lived at Rancho Monserate CC where he enjoyed the view of Fallbrook mountains of Rainbow. After returning to Fallbrook, Russell worked with the Fallbrook Historical Society, doing many writings of his early years in Fallbrook. Russell was a member of the Fallbrook Order of Masonic Lodge #317 for over 60 years.

There will be a private service on Aug. 17, 2022 at Rancho Monserate CC. Donations in his name can go to the Fallbrook Historical Society and the Fallbrook Food Pantry.