On February 16 a group of volunteers met at Fallbrook Skilled Nursing Facility on Potter Street to beautify the yard for the patients and staff.

Local resident Jerry Weiss spearheaded the project after having spent two weeks in physical therapy at the facility.

Because the maintenance staff had no time to add to the existing rose gardens, Weiss decided to organize the installation of 100 flowering plants through the Fallbrook Schools Organic Gardens program.

Annual flowers in four-inch pots were planted among the 200 feet of rose gardens that border a large lawn on the south side of the facility’s courtyard. The varieties planted were calendula, stock, snapdragons, dwarf trailing sweet peas and lobelia (as well as lavender and rosemary).

The staff will be able to harvest these plants in large quantities as cut flowers to be used in classes on flower arranging. They will also be placed in the patients’ rooms and around the facility. (There are 65 to 70 patients on average in residence.)

The volunteer gardeners hope that the aroma of the sweet peas and stock flowers will add a spark to everyone’s days.

Weiss plans to include the Skilled Nursing Facility in the Fallbrook Schools Organic Gardens outreach program, through which students can do community service. 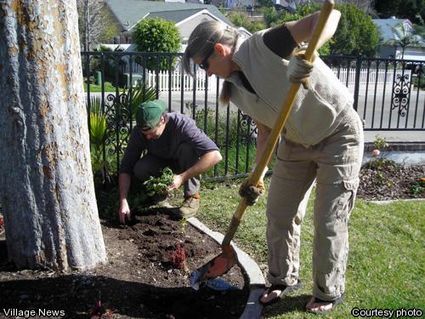 Brad Tatarzycki (left) and Lynn Weiss add some flowers to the border around this tree in the courtyard of Fallbrook Skilled Nursing Facility.

Facility administrator Melanie Henderson said that her staff holds activities, special events and nature walks for the patients outside whenever possible, as “the grounds here are one of the best parts of the facility.”

As for the improvements accomplished by former patient Weiss, Henderson said, “We really appreciate his community spirit. We love to have the community here get involved [with the patients].”