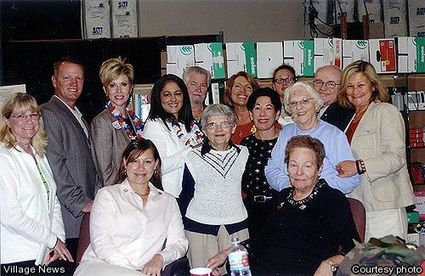 OCEANSIDE- Fallbrook residents continue to participate in Operation Interdependence (OI), an organization that provides a means for community members to support troops serving on the frontlines, military families and veterans. The organization was founded by Fallbrook resident Chief Warrant Officer Albert R. Renteria USMC (Ret.) in 2001 and the area office is located in Oceanside.

Recently, an Open House event was held at the office to welcome newly appointed national president Vicki Nixon and vice president Faye Eson, both of Houston, Texas. “I am honored to be here because Oceanside was the first OI distribution center and those volunteers laid the foundation for our successful growth across the country,” said Vicki Nixon.

Last year, OI distributed 47 tons of goods to deployed troops in Iraq, Afghanistan, Egypt and East Africa, to military families at Camp Pendleton and Fort Hood, and to two veterans’ hospitals, one in Los Angeles and another in Texas.

To contribute to the effort, residents can prepare individual quart-size (only) Ziploc bags that contain a personal note from a caring civilian at home and a few treats such as snacks, games and personal care products. The key element is the personal note from a civilian that has never met the Soldier, Sailor, Marine, or Airman.

In Fallbrook, those donated bags of goodies can be dropped off to Bob Hillery, Willis Allen Real Estate, 1595 South Mission Road, Fallbrook. For more specific information and guidelines, go to http://www.oidelivers.org or call Bob Hillery at (760) 723-2353.