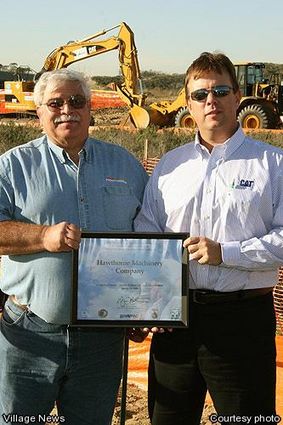 Due to advanced emissions standards on Caterpillar machinery, and further improvements by Hawthorne technicians, cleaner-burning construction equipment is being used to remove contaminated soil from Camp Pendleton Marines Corps Base.

At a ceremony on January 14 at Camp Pendleton, the EPA honored the participants of the project.

The Navy and Marine Corps at Camp Pendleton are utilizing clean diesel technologies, retrofitted equipment, ultra low sulfur diesel fuel, and biofuels on construction vehicles to remove over 120,000 cubic yards of contaminated soil. By using cleaner burning technology, total PM10 emissions from the excavation project will be reduced by 27 percent.

Eric Coates, president and owner of West Coast Environmental Consulting, is responsible for the site remediation and says he prefers working with Hawthorne above other machinery suppliers.

“I have been partnering with Hawthorne for many years,” Coates said. “Before I started this company, I handled major cleanup projects for the Department of Defense and knew I could always count on Hawthorne’s equipment and service. They are responsive to my needs, no matter what the hour. I look forward to working with Hawthorne on future projects.”

It will take approximately one year to clean up five sites at Pendleton, with two more sites slated for remediation. The land will be restored for marine training or as critical habitat for threatened and endangered species.

Hawthorne’s Tier 3 machines used in this project have electronic engines, hydraulics and power trains that are all controlled by separate electronic control modules, or ECMs. One ECM boasts four-times the computing capability than the three combined computers on the Apollo’s space capsule. All the ECMs communicate, optimizing the performance and emissions of the machine.

Upon accepting the award on behalf of Hawthorne, Technical Communicator Dean Hornbacher said, “People often perceive construction equipment as contributing to the environmental problem. Because of Caterpillar’s and Hawthorne’s commitment to emissions technology, we are now seen as part of the solution.”

For more information on Hawthorne’s Tier 3 machinery or retrofitting program, call them at (800) 437-4CAT or visit http://www.hawthornecat.com.