Donations from the heart touched many lives 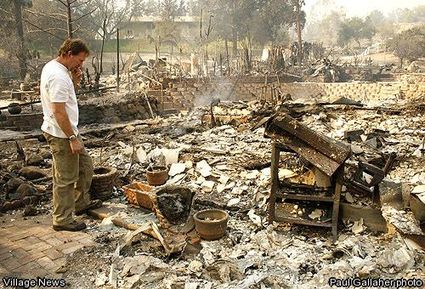 When more than 206 families lost their homes due to the Rice Fire and countless others were displaced due to a variety of circumstances, members of the community came forward and donated money, clothing, bedding, household items and more to those in need.

“So many people had nothing; it was devastating,” said Tina Rainey, executive director of Legacy Endowment… the Community Foundation, the nonprofit organization that stepped forward to accept and distribute donations to the victims.

Donations to the fund totaled $127,518. To date, $125,250 of that has been distributed, in five different funding cycles. The first distribution was made last December and the fifth in June of this year.

the Ashes’ fundraiser that was organized by local business owners and other dedicated individuals. ‘After the Ashes’ netted $51,595 for the victims’ fund.

Other major donors to the fund included the Fallbrook Healthcare District, Pardee Homes, Race Across America and the Fallbrook Rotary Club Foundation.

Large numbers of small donations added up to significant amounts. Adults and children alike collected money and brought it in to help the victims; churches mobilized to help; teens held fundraisers; and service organizations worked their magic.

Victims filled out application forms to receive a share of the donations and went through a personal interview process so their claim could be validated.

“Many of the victims lost their jobs, vehicles and more,” Rainey said. Circumstances varied from victim to victim, but all had devastating loss and hardship in common.

There were disabled individuals that left without some of their necessities. One retired couple who had been raising their two young grandsons lost everything they had. Several individuals with home-based businesses lost some or all of their means of sustaining their livelihood.

Several single mothers and widows desperately needed help. Dozens were uninsured; of those who were insured, the majority was underinsured. And the list went on.

There were those who had suffered devastating losses but felt others’ losses were worse and encouraged Legacy to help those individuals first.

“Some people told us they would really appreciate some help but that certain others needed it more than they did,” Rainey said. “In the end, some gave up their applications so others could be funded.”

When she and her son were evacuated, she was able to grab a few boxes of files, her computer tower, pictures and jewelry before she left, but did not have anything other than her work uniform to wear.

“I thought we were going to be coming back home that night,” she explained. “I just figured [the firefighters] were going to come, hose the place down, and we would be fine.”

Ciani used the Internet to keep herself updated with information on the fires but did not know the condition of her house until photos of the mobile home park began surfacing on the Internet. When Ciani saw images of the entrance to the park, she was certain her home was gone.

“I could see where [my mobile home] would be and there was just a ton of flames coming from that area; I knew for sure my home was gone,” she said. “I never thought that would happen to me.”

Although Ciani said she felt a “strange, abandoned feeling,” she still felt everything would eventually be okay.

When they returned to town, Ciani and her son were amazed at how much help they received from organizations and volunteers. They were given clothes and furniture. Legacy distributed money to her and the Red Cross gave her money for medicine and other necessities.

Today, Ciani is once again living in Valley Oaks Mobile Park but said she has mixed feelings about living there. To her, it is comfortable because it is an environment she is used to, but it feels surreal because her home is not the same.

Despite that, Ciani said she has never once thought about moving to another town or even another part of town.

“It’s such a beautiful place to live, and I sleep much better now that I’m back,” she said.

At Legacy, the fire tragedy brought about awareness of a need the community had that had not been addressed.

“We have decided to use the small amount of money left in the account to establish a perpetual fund for disasters in the future,” Rainey explained.

While no one wishes to relive a tragedy like the Rice Fire, Legacy has once again done what it does best: made plans for the future.