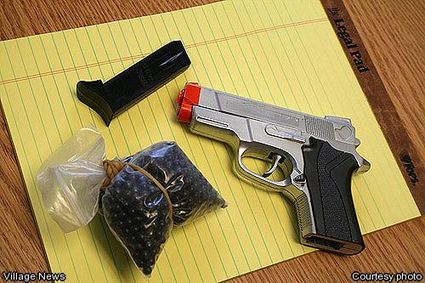 This air soft gun was confiscated from a fourth-grader and two sixth-graders at Live Oak Elementary School.

The governing board of the Fallbrook Union Elementary School District (FUESD) voted to expel three students for possession of an imitation firearm, a direct violation of Education Code Section 48900, at their regular meeting on November 17.

The students, a fourth-grader and two sixth-graders from Live Oak Elementary School, were found with an air soft gun, a toy gun that is a replica of a real firearm and bullet magazine but shoots plastic pellets or BBs instead of bullets at a high velocity.

According to Tom Rhine, FUESD pupil services administrator, the air soft gun in question looked like a .357 Magnum revolver and “could have caused panic” among students if it had been brandished around a large group of students.

“The gun looked like the real thing,” said Rhine. “I would hate to think what could have happened if they had pulled out the gun in town or around a police officer.”

However, Rhine said anything taken onto school grounds that could be considered a weapon, used as a weapon or mistaken for a weapon is grounds to expel a student.

The decision made to expel a student is made by the FUESD governing board based on the Educational Code, the nature of use of the weapon and the student’s behavioral history after interviews with the children involved and their parents.

In the case of the three Live Oak students, the expulsions were suspended in order to allow one student to go to La Paloma Elementary and the others to attend Santa Margarita Academy.

The students are not “off the hook” yet, said Rhine. They will be placed on a rehabilitation plan, which involves a probationary period in which the students must undergo counseling and three random drug tests, while their parents attend parenting classes.

If the students commit any prohibited acts while on probation, they will be expelled from the district.

Fallbrook Union High School District Superintendent Dale Mitchell said the high school district follows a similar disciplinary program and educational code regulations and believes it is the district’s primary responsibility to make sure students are safe while at school.

Mitchell said there were no recorded weapons, explosives or firearm incidents requiring expulsion in the 2006-2007 academic school year, and there was only one expulsion because of a firearm on campus in the 2007-2008 academic year.

“One expulsion [for possession of a firearm] is one more than we would like to have,” said Mitchell. “We invest a lot of time and energy making sure students know what is appropriate and inappropriate to bring to school.”

However, many elementary students are unaware of what is permissible on school grounds, so Rhine asks that parents be aware of what their children take with them to school.

“<Air soft guns> are readily available to some students online, at home and at stores,” said Rhine. “The only time these guns should be used is with parental supervision, and parents should check their children’s backpacks before sending them to school.”

To read the educational code regarding expulsion, go to http://www.leginfo.ca.gov.