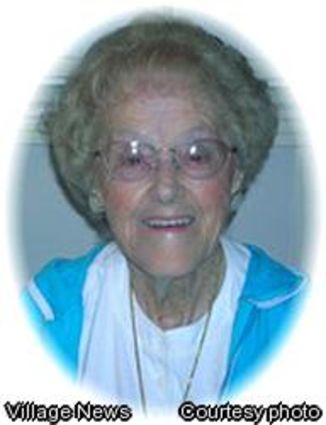 She was a remarkable force of nature with intelligence, infectious curiosity, sassy independence, genuine optimism and a rock-solid faith. She was a teacher extraordinaire for 29 years and baked the best chocolate chip cookies on earth. The world is a better place because she lived and a sadder place without her.

Madge was born in Mabel, NC, on February 14, 1915, to John and Ella Castle. She was raised in the Blue Ridge Mountains with her three sisters and four brothers. She was precocious, starting school at age 4 and graduating from high school at age 16. She was the first in her family to attend college, graduating from Appalachian State Teachers College in Boone, NC, in 1937.

She took a year off after her junior year to visit her oldest sister in Southern California, a decision that changed her life, for she met her future husband, P.W. Earls, a neighbor of her sister. They married on June 14, 1939, and lived in California most of the next five decades, landing in Fallbrook in 1947 with their first two daughters, Nancy and JoAnne. Their third daughter, Bonnie, was born in Fallbrook on Main Street in 1951.

Madge began teaching again in 1956 at Mary Faye Pendleton School on Camp Pendleton, moving in the early 1960s to Maie Ellis Primary School, where she taught until her retirement in 1981. She and P.W. then spent much of the next 18 years between Fallbrook and Boone until 1999, when traveling became too difficult. They celebrated 63 years of marriage before P.W.’s death on December 27, 2002. Madge returned to California and lived in Port Hueneme, Ventura County, near her daughter Nancy.

In addition to her parents and husband, Madge was preceded in death by sisters Blanche Greer, Ruth Critcher and Jean Fenster and brothers Fred, Vernon, Warren “Preacher” and Clark.

There was a memorial service on November 2 in Oxnard and a funeral on November 13 followed by burial in Mount Lawn Memorial Park & Gardens service in Boone.

Memorial contributions may be made in honor of Madge to Pacific Coast Ministries, Perkinsville Baptist Church, March of Dimes, Samaritan’s Purse in Boone or a charity of your choice.