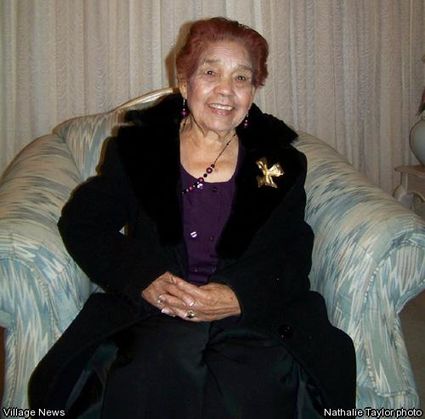 Susana Diaz still lives above the restaurant she founded in 1956.

An elegant woman with a regal bearing sits on a brocade chair, her matching jewelry and clothes the epitome of style. When Susana Diaz rises she stands only four-feet-four-inches, but inside this compact package lies a strong woman who overcame many obstacles to persevere as the 87-year-old matriarch of a pioneering Baja California family.

For 52 years Susana and her family have worked hard to send out delicious scents from the village of Puerto Nuevo, according to Karina Ramos of Fallbrook, granddaughter of Susana, who, along with her husband Don José Plascencia, has been credited for creating a community out of virtually nothing on the barren coast of Baja. In 1956 they established a lobster restaurant, Puerto Nuevo II, and in 1985 the family opened a second establishment, La Casa de la Langosta.

Today over half a century later, the area is renowned for its lobster restaurants and, at last count, there were approximately 35. The village lies fifteen miles south of Rosarito Beach.

Susana was born in the Colima area of Mexico. There were ten children in her family, but a malady took the lives of all but two children, Susana and her sister, Marcelina. The mother and father also died shortly thereafter and the girls were raised by godparents. In 1955 Susana moved to Baja because there was no work to be found in her native Colina. She worked at a restaurant in the Puerto Nuevo area and it was there that she met her future husband, Don José, who had settled in Baja, lured by the sea, which was then teeming with lobster.

After they married, Don José would catch lobster and Susana would deep fry the crustaceans. Fishing trips with American tourists were the livelihood of the couple at the time. Don José would return with a load of lobsters and Susana would prepare them in her kitchen. The tourists became so enamored of her cooking that in 1956 Susana and Don José opened a small restaurant which became the first lobster establishment in Puerto Nuevo.

In the beginning, the restaurant was bereft of water and electricity. Kerosene lamps and candles would light the interior. Food was cooked on a propane stove; and water was hauled to the site in large plastic tanks. Dishes were washed by hand.

The couple raised three daughters, Susana, Rosa Maria and Elvira who helped with the restaurant when they were old enough. “She was very organized in telling us what to do,” said Elvira, Karina’s mother.

For many years lobster was the only main dish served, and sides of fried beans, Spanish rice, hand-made flour tortillas and fresh salsa accompanied the orders. The elder Susana made the salsa using the “molcajete,” or mortar, which was a grinding stone used with the “tejolote,” or pestle.

In 1980, just four days before his granddaughter Karina was born, Don José passed away. Susana, adjusting to life as a widow, kept the restaurant going; and in 1985 the family established a second restaurant, La Casa de la Langosta, just across the street. It is now managed by Susana Plascencia, one of the elder Susana’s daughters. Rosa Maria Plascencia, another daughter, manages Puerto Nuevo II. Her third daughter, Elvira, lives in Fallbrook with her husband, Alfonso Ramos.

Susana Diaz still lives above Puerto Nuevo II where she has resided for 35 years. During the 50th anniversary of the restaurant two years ago Susana was honored with a large reception where she was presented with a medallion in the shape of Baja California.

Susana attributes the success of the restaurants to loyal family participation and then said, “And the food is really good!” The tortillas are still handmade and the lobster, although difficult to find locally, is still fresh.

The Web site, Bajalife.com, must agree with Susana because they named Puerto Nuevo II the restaurant with the “Best Food.” 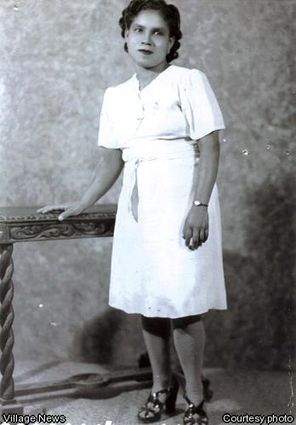 Karina, who is a graduate of the California State University, San Bernardino and works as art director for the Fallbrook Village News, has learned a great deal from her grandmother. One of the most valuable lessons is the importance of family. The Ramos family travels from Fallbrook to Puerto Nuevo about once a month.

“Food and family go together,” said Karina. The music and scents that emanate from the restaurant below her grandmother’s home are “very comforting” to Karina.

Today, visitors travel to Puerto Nuevo to eat lobster, but Karina comes for the ambiance, which always includes a family meal around a table with music floating up from the very successful restaurant below – thanks to a strong, hard-working, but very petite woman.