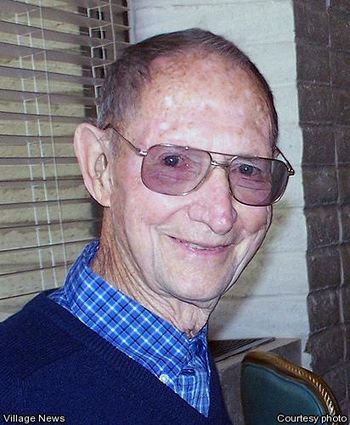 Timothy J. Kearns, a longtime resident of Fallbrook, died November 12, 2008, in McKinleyville, CA, where he had lived for the past year. A funeral Mass will be held Saturday, February 7, at 1 p.m. at St. Peter’s Catholic Church in Fallbrook, with a reception to follow.

Tim was born in Joliet, IL, on November 30, 1919, to Thomas and Nellie Kearns, the youngest of three sons and the only one to survive beyond childhood. His life was guided by an ingrained sense of honor and service, particularly in his devotion to his family, to his Catholic faith and to his country as a US Marine. He possessed a resilient attitude, gracious demeanor, sense of humor, intrepidness, integrity, an appreciation for his many blessings and pride in his Irish heritage.

As a young man, he worked a variety of jobs and excelled as a collegiate athlete, competing in football, baseball and wrestling. He left his studies at Northern Illinois University in January 1942 to enlist in the US Marine Corps. He was selected for officers training and retired as a lieutenant colonel in January 1969.

As a young marine in Hawaii in November 1946, he met a young nurse named Frances Magary on a blind date. A courtship ensued and they wed in Hawaii in July 1947, beginning a partnership that lasted 56 years, until Frances’s death in 2003.

Together they made homes in Hawaii, Virginia, South Carolina, North Carolina, Ohio and California. They lived in Fallbrook for roughly 25 years. They also traveled widely together, visiting all 50 states, Puerto Rico, Ireland and other parts of Europe, Southeast Asia, China, Russia and the Caribbean. Hawaii remained most special and they shared individual trips there with each of their children’s families.

In the Marine Corps, Tim served in many varied capacities, including as a captain on the front lines in Korea in 1953 (for which he was awarded the Bronze Star) and as commander of Camp Schwab – a Marine Corps base in Okinawa, Japan – in 1963. The Kearns family resided in Fallbrook from 1962 to 1969. Following Tim’s retirement from the Marine Corps in 1969, he began a nine-year career as the business manager for Mount St. Mary’s College in Los Angeles; later he served in a similar position for Viewpoint School in Calabasas, CA. In 1985, after 16 years of residing in Northridge, CA, he and Fran retired to their former home in Fallbrook, where they participated in community and church activities, gardened, traveled and enjoyed visits from family and friends.

Throughout his career, he continued to pursue his education, completing his bachelor’s degree at George Washington University in Washington, DC, in 1961. He earned his master’s degree in history in 1974 at Chapman College, where his thesis focused on the history of the Fallbrook Union School District. His commitment to education also included voluntary service as treasurer of a fundraising committee for St. Peter’s Catholic School in Fallbrook. He also served as treasurer to the Camp Pendleton chapter of Mustangs (Marine officers who rose from the enlisted ranks).

Along with spending time with family, his favorite lifelong pleasures included dancing; reading; playing cards, Scrabble and sports; and tending to his orchard and garden.

Throughout his life, he also enjoyed the companionship of dogs. As a boy, he had his own pup and helped his uncle raise greyhounds. As an adult, his household almost always included an Airedale terrier (or two) and occasionally a litter of puppies. Until very recently, he was able to enjoy walks with a friend’s greyhounds in McKinleyville.

He is survived by his children and their spouses, Timothy M. Kearns and Siste O’Malia of La Plata, NM, Maureen V. Kearns and Robert Kammerer of McKinleyville, Denis and Annie Kearns of Apple Valley and Sean Kearns and Dianne Orsillo, longtime residents of Arcata, CA, now in Long Beach; grandchildren Chama Cliff and her husband Ralph, Tyler Kearns and Sam Kearns and Noah Kearns and Brenna Kearns; and great-grandchildren Jack and Hannah Cliff.

Inurnment will be at Fort Rosecrans National Cemetery in San Diego. In lieu of flowers, memorial contributions may be made to the Live Oak Park Coalition, PO Box 2974, Fallbrook, CA 92088, or the Navy-Marine Corps Relief Society, http://www.nmcrs.org.