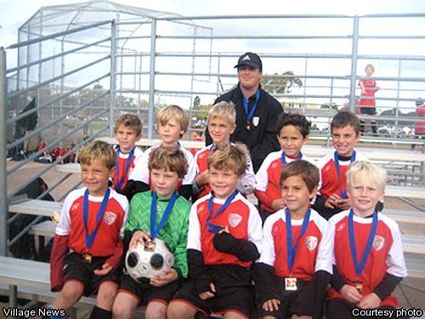 FALLBROOK — The Fallbrook Fury boys’ under-8 (BU8) soccer team won the championship in the Presidio Soccer League end of the season tournament.

The team worked their way through the preliminary round by beating Nado Select, Orange Voetbal and FC Heat. This set up a semifinal game match which Fury won over CV Manchester.

In the finals, Fury took the early lead over the Carlsbad Lightning with a goal by Charles Criscenti. Fury’s tough defense kept Carlsbad out of scoring position and allowed them to capture the win.

Overall, Fury outscored their opponents 10 to 1 and goalie Tiane Maestas had 4 shutouts for the tournament.

The Fallbrook Fury is the competitive branch of the Fallbrook Youth Soccer League. Fury FC has finished a very successful 2008 season with BU16 capturing their league title and BU10 and GU11 finishing as league runners-up.

For information on Fury’s upcoming tryouts on February 21 and 24, visit http://www.fallbrookyouthsoccer.com.