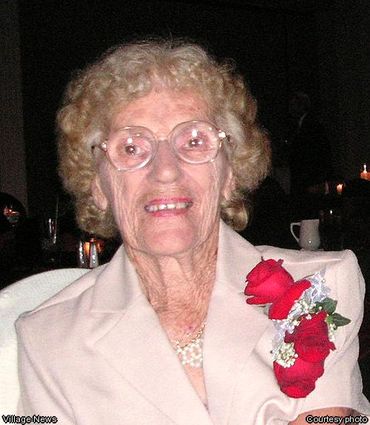 Frieda Ann Walter Ludwig, 90, passed away peacefully on February 6, 2009, surrounded by her family at her home in Grass Valley, from complications of a massive stroke she suffered in July 2008. Frieda was born on February 24, 1918, in Milwaukee, WI.

She married Mike Ludwig of Milwaukee on June 11, 1938, and in June 2008 they celebrated their 70th wedding anniversary. Mike’s work as a civil engineer with the Corps of Engineers required numerous relocations, but with each new house Frieda created a home for her family, as being a wife, mother and homemaker were what gave her greatest happiness and pride.

The family lived in Colorado Springs, CO, Santa Barbara, CA, La Paz, Baja Mexico, and moved to Fallbrook in 1975. Mike worked with Mission Realty as a broker and they had a small avocado ranch off Stage Coach Lane. In 2001, they moved to Grass Valley.

Frieda was known as the ‘Energizer Bunny’ for her boundless energy, outgoing personality, great enthusiasm and optimistic outlook. She loved to garden, especially growing flowers and orchids.

Frieda will remain in the hearts of her husband of 70 years, Mike; daughter Arlene Warynick of Santa Barbara; sons Robert Ludwig of Grass Valley and Michael Ludwig of Paris, France; nine grandchildren; and five great-grandchildren. She will be greatly missed by family and friends. A celebration of life is planned for a later date.