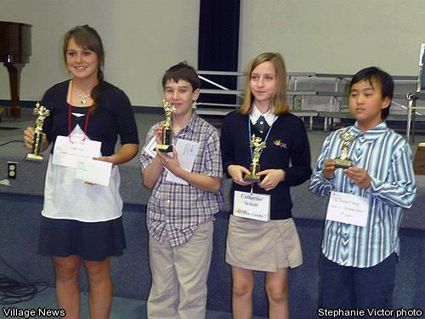 TEMECULA — Congratulations to Sarah Victor of Fallbrook and Jade Verdeflor of Temecula, who represented Rancho Community Christian School at the ACSI District Spelling Bees on January 30 in Riverside, which included grades one through eight.

Sarah won first place and Jade won second in the eighth grade bee. Both girls went into the final rounds, which included the top two spellers from each grade, fifth through eighth.

In the final round, Sarah won first place, Zachary Orlasky second, Katherine Schult third and Justin Chung fourth. The four went on to compete in the ACSI Regional Spelling Bee in Pasadena on February 21.