Bonsall woman recovering from injuries is 'star for a day' 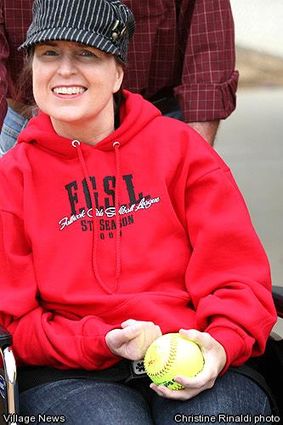 In her red Fallbrook Girls Softball League sweatshirt 38-year-old Jennifer Palmer of Bonsall recently threw out the first pitch to open the league’s spring season. This was not just an ordinary gesture; it was symbolic of Jennifer’s progress toward physical, mental and emotional healing after a devastating motorcycle accident in 2006.

On September 17 of that year her life changed. Jennifer, who was wearing a helmet, was run off the road by a driver in an SUV who didn’t even bother to stop and assist her. “He knew he hurt me,” said Jennifer, who suffered a traumatic brain injury that day.

She was life-flighted to a hospital in northern California near the accident site. Jennifer remained in a coma for three months, but her family never gave up hope. They kept her connected to life support and did a lot of praying. (The family attends Calvary Chapel of Oceanside.) Jennifer was fitted with “trach” and stomach tubes that had to be kept in place for an entire year.

“She was in a vegetative state for the first year and some wanted to just pull the plug,” said Jennifer’s father, Elston, “but we stuck by her with a lot of prayer.”

The initial attending physician told the family that Jennifer was so severely injured that it would be impossible for her to mend, Elston related. During those first five months or so every physician who attended Jennifer had the same prognosis of “no hope.” But through her family’s prayer and her own determination, she did begin to mend.

After she awakened from the coma, Jennifer was brought to a care center in Vista where she remained until moving home to Bonsall last May. Two months earlier, while under the care of Sharp Hospital’s rehab unit, she began to stand and walk with the aid of a metal walker.

Jennifer’s strength continues to improve and her attitude is a major part of that healing process. “I’m getting better all the time,” she said with a sparkle of determination in her eyes, “and will be walking by myself in one year.”

Solid food has been a part of Jennifer’s diet for a year and a half now and she especially enjoys sushi, which she eats with chopsticks. Chopsticks are difficult to wield, but she has mastered the art.

Jennifer also loves to “get out of the house;”and another treat for her is to visit Starbucks for something deliciously sweet with a lot of whipped cream.

Mesa College’s Acquired Brain Injury program (ABI) offers classes where Jennifer studies cognitive communication and journaling, among other subjects. She has taught herself to write with her left hand and journals frequently. Her father mentioned that Jennifer is “strong-willed and a hard worker,” which is evident in her classroom progress.

Jennifer lived most of her early years in Fallbrook, where she played softball under the direction of Coach David Hadley, who was responsible for asking her to throw out the first pitch this year.

“When I was in junior high I was an excellent pitcher,” she related. Her team won the San Diego County Championship during her sixth grade pitching year.

Jennifer went on to graduate from Fallbrook High and then earned a BA in criminal justice from the University of Nevada.

As an intelligent and creative woman, Jennifer meets the challenge of her injury with a combination of faith, grit and fortitude. With the support of her family and friends and her faith in God she is moving toward the day when she will walk unaided.

Throwing out the first pitch of the season was another step toward complete healing. As Jennifer journaled that day, “I threw a slow but methodical strike. I had to use my left hand, but when I was a pitcher I used my right… When I was done, I got a cheer. I was a star for a day!”