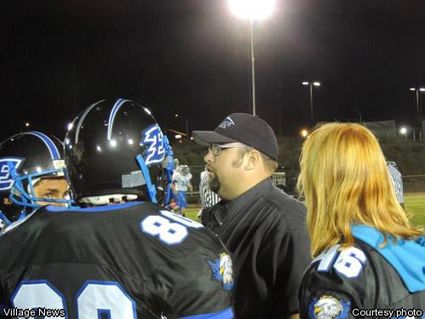 Fallbrook High School’s varsity football team has had previous 1-9 seasons, including the 1993 season when Chris Fore was a Fallbrook High School senior. Fore had been involved in an automobile accident earlier in high school and was unable to play that year due to his injury, so, as he served as the offensive line coach for the Warriors’ freshman team which posted a 6-4 record that year. That was the start of Fore’s coaching career.

This year Fore took over as the athletic director of Excelsior Charter School in Victorville and was also the special teams coordinator for the Eagles’ football team. On Nov. 24, Excelsior’s 69-26 victory over The Thatcher School (Ojai) gave Fore his first CIF championship as a player, coach, or athletic director when the Eagles won the CIF Southern Section 8-man football championship.

The 2012 season was Fore’s 13th as a high school football coach. “It’s just kind of fun to think back on all the kids and coaches you’ve been with,” he said.

Fore was also on the coaching staff of Fallbrook’s 1995 junior varsity team. He moved to Temecula in 2001 and was Linfield Christian’s junior varsity coach in 2001 and 2002 before coaching the Lions’ varsity from 2003 through 2005, including the 2004 season in which Linfield reached the CIF Southern Section semifinals.

Fore sought to return to coaching and athletics. “I wanted a job as an AD or head football coach,” he said.

He was offered the position as the athletic director of Calvary Murrieta, but the compensation was insufficient to support his family. “We really wanted my wife to stay home and be able to raise the kids,” Fore said.

Fore also signed a book contract with Coaches Choice in January 2012 to write a book on successful coaching. The book, which is expected to be published in February, is titled “Leadership Lessons to Build a Championship-Caliber Football Program.” Fore sent correspondence to the coaches of every 2011 high school state football champion in all divisions throughout the United States and received 108 responses from 42 states. He then analyzed the responses and provided 10 major characteristics of successful football programs.

“I learned a ton,” Fore said. “This book I wrote has definitely helped to influence and shape how I’m running things.”

There is no California state championship for 8-man football, but both maxpreps.com and calpreps.com ranked Excelsior first in the state. “Our team here this year, we’re mythical state champions,” Fore said.

His dismissal at Capistrano Valley Christian occurred late enough in the academic year that most positions were filled, but he was able to seek 2012-13 vacancies.

During the last week of June 2011, Fore’s final action as the Capistrano Valley Christian coach was with a senior all-star game where four of his players participated. Fore met Excelsior head coach Bill Rivera at the all-star game. When Fore learned about the Excelsior athletic director vacancy in May, he checked with Rivera. “He’s the first guy I called to try to get a sense of what the school’s like,” Fore said.

Rivera liked the idea of Fore becoming the athletic director. “He fought for me here on the campus,” Fore said.

After Fore’s family lost the Oceanside home, they moved to a vacant house in Redondo Beach owned by his wife’s family. Fore was selected as Excelsior’s athletic director May 26, and the family moved to Victorville on July 1. Their Victorville home is one mile from the school, which has a long-term lease for property on the Victor Valley Community College campus. Fore’s three children are now 6, 4, and 1.

Fore sees that success leading to titles in other sports. “I’m a big believer that success breeds success,” he said.

The only winter sports Excelsior fields are boys basketball and girls basketball. “I hope to add soccer next year,” Fore said.

Excelsior has about 1,200 students from seventh through twelfth grades including about 800 high school students.

The Eagles play on their own football stadium field leased from the junior college, and the school just opened a $35 million facility which includes a gymnasium.

“It has been a great blessing being here and being part of a state championship football program this year,” Fore said.

Excelsior had never previously won a CIF championship in its 10-year history, but the Eagles had reached the 8-man CIF finals in 2011 and 2010. “This program has been doing a lot of great things for a long time, and it was great to be a part of it this year,” Fore said.

The 2012 season also ends Excelsior’s era of 8-man football, as the Eagles will play 11-man football starting in 2013. “I’m excited about getting us into 11-man football. We have the kids to do it,” Fore said.

The Agape League does not have 11-man football, but the Desert Mountain League accepted Excelsior for football only. The Eagles’ 8-man play thus ended with the CIF and mythical state championship. “We closed that chapter with a championship. There’s no better way it could have happened,” Fore said.

Fore was 10 years old when Fallbrook High School won its 1986 CIF championship. He watched that game in person. “I’ve been following Fallbrook football forever. It never leaves your blood,” he said.

Fore has more than memories of his 1993 season coaching Fallbrook’s freshman football team. “I’m still in touch with some of those kids,” he said. “That’s the great thing about coaching, those relationships you build.”