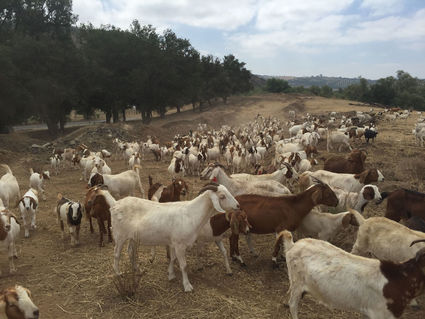 A pair of agenda items on the Sept. 6 Bonsall Unified School District (BUSD) board meeting addressed the Gird Road property which is planned to be the future site of Bonsall High School.

BUSD owns 50 acres off of Gird Road. Bonsall High School, which opened in August 2014, is currently on the same campus as Sullivan Middle School. The school district intends to build a new high school on the Gird Road property.

Financial and regulatory variables will determine when the initial facilities at the Gird Road location will be able to accommodate Bonsall High School students, faculty, and classified employees. "We're hoping that it would be 18-19," said Cunningham.

Bonsall High School opened with only ninth-graders and is expanding by one grade each year until the school has all four grades for 2017-18. Cunningham expects Bonsall High School to have between 400 and 500 students in 2019, but he also expects new development projects within the BUSD boundaries to increase future enrollment.

"We're looking at so much development coming in," said Cunningham. "We'd better plan a few years out on how many kids we'll actually have there."

On May 12, the BUSD board voted 4-0, with Timothy Coen absent, to approve a contract with Kunzman Associates, Inc., which is based in Orange, to provide a traffic impact analysis. The scope of work includes reviewing access locations and internal circulation, identifying existing roadway conditions including peak hour intersection turning movement volume data, determining the cumulative impact on roads from traffic the school will add, and preparing a traffic impact analysis.

The original contract had a limit of $12,250 not including permit and submittal fees with the actual amount being based on hours worked along with specified hourly rates. That initial agreement covered traffic counts at up to seven intersections and was based on an enrollment of 1,200 students.

One of the school board's Jan. 13 actions was to award a contract to Baker Nowicki Design Studio for architectural services for the high school's capital improvements. Baker Nowicki's tasks included community outreach, and during the three public planning sessions the potential student enrollment was modified.

"Fifteen years from now that could be 1,500 kids there," Cunningham said.

The modified traffic study contract approved Sept. 6 increases the maximum authorized payment to $15,750 while modifying the scope of work to increase the number of intersections studied from seven to 10. The 10 intersections to be evaluated include seven along State Route 76, where predictions of impacts from the school will be evaluated at the highway's intersections with East Vista Way, North River Road, Old River Road, South Mission Road, Via Monserate, Gird Road, and Old Highway 395. The Gird Road intersection with Knottwood Way just north of the school will also be studied as will the Camino Del Rey intersections with Old River Road and with West Lilac Road.

The North County Fire Protection District has suggested an annual maintenance plan for the undeveloped property which includes a recommendation that the school district remove weeds, grass, and other flash fuels on the site. "Most of it's just all grass," Cunningham said.

BUSD staff proposed a combination of mechanical removal and goats which will eat the vegetation.

"That's one way we thought would be a good eco-friendly way to do some maintenance, to have the goats chew it down," Cunningham said.

Environmental Land Management, Hire-A-Goat, and Rent-A-Goat were asked to provide quotes. The ELM bid was the lowest per acre, and the school board subsequently approved the $33,500 contract.

In addition to the goats, the animals on the premises during the work will include herd dogs or guard dogs to ensure the security of the goats as well as the site itself.

The contract with ELM required the school district to notify adjacent property owners and tenants of the work.

"The community, I thought, was very welcoming," Cunningham said.

The work is required by the contract to be completed by Oct. 11. "We're hoping it will be done in the next couple of weeks," Cunningham said.