On the eve of announcement of jury's verdict, JD Crighton is convinced Merritt committed the crimes 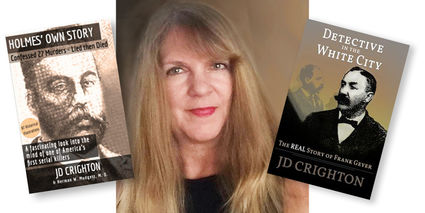 JD Crighton has been covering the murder trial of Chase Merritt, accused of killing the McStay family of Fallbrook in 2010, for a true crime book she is writing. Crighton has written "Detective in the White City," about the investigation of the serial killer, H. H. Holmes, and the horrific discovery of the missing Pitezel children; "Holmes' Own Story: Confessed 27 Murders – Lied Then Died"; and "Nobody's Hero: The Shocking Story of Chris Watts, the Sociopathic Monster Who Killed His Family," which will be published soon.

True crime author JD Crighton couldn't have known how long it would take for the State of California to attempt to prove that Charles "Chase" Merritt is guilty of murdering the McStay family.

"When I dedicated myself to this case, I never imagined the trial would take five months!" Crighton said.

But it did. In fact, it took six months.

At 10 a.m. Monday, June 10, the verdict will be read and the world will know whether or not Merritt is guilty of the horrific crimes.

Crighton said she chose to cover this case - the murders of Joseph and Summer McStay and the couple's young sons - 4-year-old Gianni and 3-year-old Joseph Jr. - because she felt compassion.

"I was first drawn to write about this case when the beautiful McStay family was reported missing in 2010 and attended the preliminary hearing held four years ago, where I watched the state present a strong circumstantial case against Charles Merritt," Crighton said. "Judge (Michael A.) Smith agreed and it was decided Merritt would face a jury of his peers. What I didn't expect was delays that pushed the trial so far out, the family must have felt it would never happen."

The Village News has been following the trial via live and recorded videos published by the Law & Crime Network and little did people know, Crighton was there to fill the gaps by recording audio files and sharing more than 60 of them with the network when Law & Crime couldn't attend.

We reached out to her on Twitter as closing arguments in the case were set to begin to ask her opinion on the trial.

"Prosecution presented an overwhelming amount of circumstantial evidence which led me to believe beyond a reasonable doubt that Charles 'Chase' Merritt is guilty," Crighton said. "First, after the McStay family went missing, Chase Merritt told detectives, 'He was my best friend,' but he did not act like a best friend would. The defendant said he talked to Joseph multiple times per day, yet, when he went missing, there were 25 voice mails on Joseph's cell phone and 31 voice mails on Summer's phone, and not one of those was from Chase."

Crighton became more convinced when Merritt referred to individuals in the family in the past tense during interviews.

"Not only did Merritt say Joseph was his best friend but when he described to detectives about Joseph's height, he said, 'He was 5'8", I guess. He was definitely shorter than me,'" Crighton said. "And his response when questioned about the children, he said, 'His boys were ..." and, 'They were ....'

"As his best friend who talks to Joseph multiple times a day, you would expect Merritt to raise the red flag and alert family and police, but it was actually Dan Kavanaugh who alerted family by emailing Patrick McStay, and it was Dan Kavanaugh, from Hawaii, who called San Diego Police to ask for a welfare check, not once, but according to San Diego dispatch, he made four calls"

Crighton said that when Joseph's mother, Susan Blake testified, she said that when she asked Merritt to hand out missing person flyers he declined to do so. Crighton also pointed to a CNN interview with Merritt in which he said, "Yeah, "I'm definitely the last person who saw him."

"How does he know he was the last person to see Joseph?" Crighton asked. "And then there was Merritt's coaching of his alibi witness, girlfriend Catherine Jarvis. On cross-examination, prosecutor Melissa Rodriguez played a tape recording of Catherine's visit with Merritt and he tells her, 'Raj (defense attorney Maline) went over stuff about you ... wanted me to tell you about what to remember ... We need you to remember it! That's the only way we can get a picture to the jury.'"

Rodriquez followed up the recording by asking Jarvis whether she spent eight hours with him "at a Super Bowl party."

"It's odd that defense would risk accusations of inappropriate behavior by spending eight hours with a capital murder trial witness at a party," Crighton said.

Crighton backed up her opinion of guilt with the fact that Merritt's hand was injured when he was interviewed by detectives and witnesses couldn't corroborate his injury happening where he said it had.

Crighton also was convinced by the DNA found on the steering wheel of the family's Isuzu Trooper, "though he claims never to have driven it."

"The 'aha' moment for me in regards to QuickBooks was that a few days after the McStay family went missing, a phone call was placed to QuickBooks from Chase Merritt's cell phone from a man who identified himself as Joseph McStay," Crighton said. "Per witness Ryan Baker, anti-money laundering investigator for Intuit, the male caller gave Joseph's master administrator email for verification and directed him to cancel the account.

Crighton said she has a "great deal of respect" for Judge Smith who was "exponentially patient and accommodating during the trial."

She said she felt the prosecution missed an opportunity to press on a table in the McStay residence that appeared to have blood on it.

She said she was surprised that cadaver dog handlers were not directed to search inside the McStay's home.

"The dogs were already at the site so it seems logical to have them search inside the home to rule that out," Crighton said. "There were times I thought prosecution sped by key points where a pause was needed. If it was hard for me to take notes during this time, and I type fast, can you imagine what it was like for jurors?"

She said she thought the prosecution was trying to make up for the fact that she believed the defense team was stalling the trial.

"Overall, the prosecution did an outstanding job presenting evidence, questioning witnesses and overcoming the constant barrage of theatrical defense tactics, character attacks, and false allegations of misconduct in front of the jurors," Crighton said. "I stopped counting how many times (defense attorney James McGee said this is a 'trial by ambush!' when in fact, they themselves tried to ambush prosecution by not providing information until the morning of testimony."

Crighton said the defense spent too much energy on pointing at Daniel Kavanaugh as the real culprit.

"Defense overdid the use of the SODDI - Some Other Dude Did It - defense and stretched the bounds of third-party culpability," Crighton said. "At times, I honestly felt it was 'People vs. Daniel Kavanaugh' instead of Charles 'Chase' Merritt."

Kavanaugh was never called to testify at the trial as the defense couldn't locate him.

"Defense pointed fingers at Kavanaugh in the press and right from the get-go at trial," Crighton said. "If he was found, he would have most likely invoked the 5th (Amendment)."

Crighton said there was much more circumstantial evidence she could share from the trial that she believes overwhelmingly proves Merritt was guilty of the murders.

Crighton said in covering a trial like this one, she feels for the family of the victims.

"I develop a great deal of empathy towards the victims' loved ones and friends," she said. "When they cry, I cry.

"In writing a book such as this, I feel a desire to right the wrongs the family suffered and to focus instead on the perpetrator in hopes that others like him would think twice before committing a horrific crime like this, knowing that ultimately justice would prevail. I hope for the families' sake, justice prevails in this case."

As an author, Crighton has written "Detective in the White City," about the investigation of the serial killer, H. H. Holmes, and the horrific discovery of the missing Pitezel children; "Holmes' Own Story: Confessed 27 Murders – Lied Then Died"; and "Nobody's Hero: The Shocking Story of Chris Watts, the Sociopathic Monster Who Killed His Family," which will be published soon.