'Puffs' is a fun parody of wizards 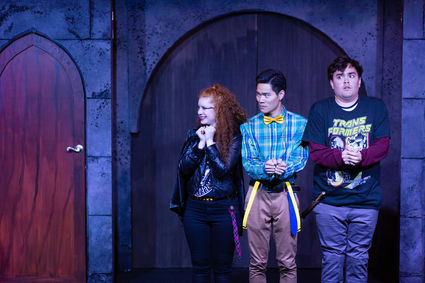 In its inaugural production, The Eastern Theatre Company of Poway made itself proud with the San Diego premier of "Puffs."

A parody of J.K. Rowling's series about a magical school with flying wizards and mysterious trap doors in a train depot, "Puffs" was acclaimed by audience members as a hit.

Like Shakespeare's sonnets, "Puffs" is filled with one double entendre after another.

Although the play was originally contrived by a band of improv players in the New York comedy club scene, author and founding member Matt Cox admitted it was just a lark and was intended for five performances.

Astounded by its success, their "little show made by friends" amazingly is running three and a half years later in NYC in addition to an ongoing production in Australia.

"Puffs" is about a "certain boy wizard who attended a school of magic...and conquered evil over insurmountable odds."

With a twinkle in his eye, the charismatic Narrator (Travis Rynders) explains the convoluted tale to the audience in order to keep us informed as the story twists along. (Admittedly H.P. enthusiasts had no problem following the parallel story - the mostly full house, knew each reference).

Wayne (Kevin Patrick Lohmann), not Harry, I know, it gets even more twisted, bumbles along with co-wizards Oliver (Kevin Phan) and Megan (Sterling Amara) into the depths of intrigue and mystery. A more charming trio of misfits does not come to mind.

Hopefully, directing duo and co-founders of The Eastern Justin Slagle and Stephen Schmitz will continue to exercise their imaginations and bring more over-the-top, off-the-wall humor to our town. Follow them on http://www.theeasternsd.com.