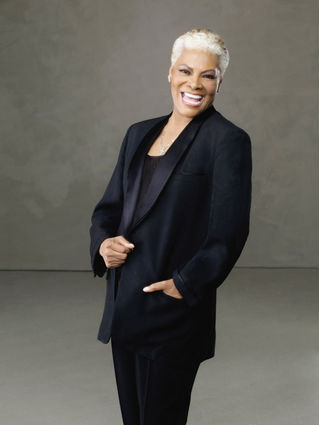 Warwick not only charmed the crowd with her mellow voice, but she delighted us all by singing a haunting duet with her eldest son, David Elliott, who also wowed the audience with his drumming skills.

The two sang a song that Warwick said was "very dear to my heart." As the words, "Forever and ever you stay in my heart," from the delightful, "I Say a Little Prayer," echoed throughout the grandstand, the cheers escalated.

Warwick's granddaughter, Cheyenne Elliott, another powerful vocalist, sang with her grandmother, as well as with her younger sister. It was a delightful and moving moment as the trio sang, "Love Will Find A Way."

The 78-year-old Warwick has a Star on the Hollywood Walk of Fame and is the winner of five Grammy Awards. This stunning entertainer has so many top hits that it is difficult to keep track of them all.

I chose Dionne Warwick songs as my background music when I worked in public relations. The tunes were inspiring as well as calming.

The author's ticket from a 1988 Dionne Warwick concert.

It was at the California Mid-State Fair in San Luis Obispo when I first saw her in concert. I still remember Warwick standing noble and elegant near the grand piano played by Burt Bacharach. The iconic musical team led the hushed audience to a place of awe with their melodic performance. It was 1988 and the concert made such an impact on me that I saved the ticket stub.

Warwick's range is still impressive – strong and deep, with occasional emotional whispers. At several points in the concert, the audience rose from their seats and cheered. When she sang, "What the world needs now is love, sweet love," the song drew the audience to their feet as they cheered and applauded in delight. The theme of "love" permeated Warwick's entire performance.

For the finale, Warwick sang, "That's What Friends Are For." Imagine thousands of people in the crowded grandstand singing, "keep smiling, keep shining, knowing you can always count on me, for sure, that's what friends are for." It was magical. Then, Warwick exclaimed, "What the world needs right now ."

What a show. Such an inspiring legacy of love.