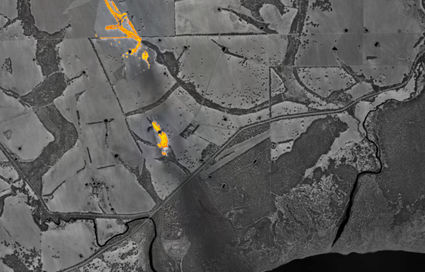 The Kangaroo Island fire pushes toward Vivonne Bay in Kangaroo Island, Australia, Jan. 9. The town and nearby region had already been evacuated. The two images show the fire three hours apart, at 1400 (2 p.m.) and 1700 (5 p.m.) local time. These images show the extent to which the fire moved and grew in that short period of time.

New real-time bushfire mapping technology created in South Australia is being deployed to California and Canada.

New real-time aerial mapping used to help the Australian Army in the devastating South Australian bushfires is being deployed to support the Californian fire season.

The technology developed by Adelaide company FireFlight was tested at the Kangaroo Island fire front using a single engine Piper aircraft flown at 10,000 feet, so its images could help the army plan recovery and relief operations.