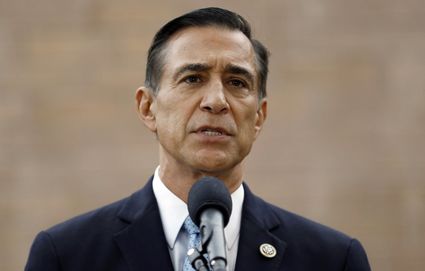 In this Sept. 26, 2019, file photo, former Republican congressman Darrell Issa speaks during a news conference in El Cajon. Issa will face off against 31-year-old Democrat Ammar Campa-Najjar in November for the 50 Congressional District seat vacated by disgraced California Republican Rep. Duncan Hunter, who dropped out and resigned from Congress in January after pleading guilty to a corruption charge. AP photo/Gregory Bull, file photo

Former U.S. Rep. Darrell Issa, a relentless critic of former President Barack Obama who retired from his increasingly Democratic district two years ago, took a step toward returning to Congress by advancing Wednesday, March 11, to a runoff in one of Southern California's last conservative bastions.

Issa, 66, will face off in November against 31-year-old Democrat Ammar Campa-Najjar, who nearly pulled a major upset two years ago when he came within 3 percentage points of defeating Republican Rep. Duncan Hunter while the lawmaker was under indictment on corruption charges. Hunter...