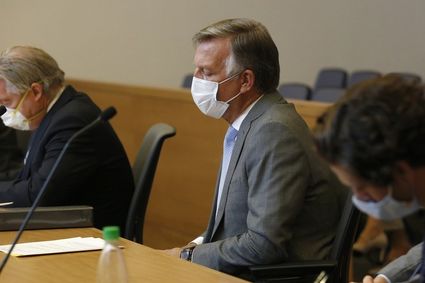 Bill Smith, interim CEO and president of PG&E Corp., listens as Butte County Superior Court Judge Michael Deems announces the penalties for its role in the 2018 Camp Fire, during the criminal sentencing hearing in the trial of Pacific Gas and Electric Corp. in Chico, Thursday, June 18. AP photo/Rich Pedroncelli photo

Pacific Gas and Electric was fined $4 million Thursday, June 18, for the deaths of 84 people killed in a nightmarish Northern California wildfire ignited by the its long-neglected electrical grid. The sentencing comes as the nation's largest utility prepares to end a 17-month bankruptcy proceeding triggered by the catastrophe.

The maximum penalty assessed by Butte County Superior Court Judge Michael Deems was a mere formality, given that PG&E reached a plea agreement three months ago to resolve manslaughter and other charges. They stemmed from a Nov...