Move to rename 'Bloody Sunday' bridge has critics in Selma 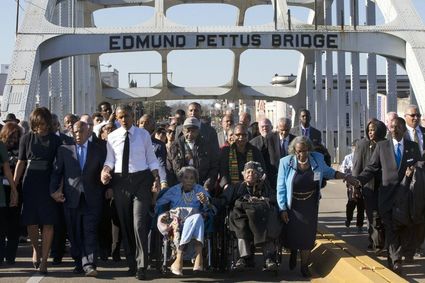 In this March 7, 2015, file photo, singing "We Shall Overcome," President Barack Obama, third from left, walks holding hands with Amelia Boynton, who was beaten during "Bloody Sunday," as they and the first family and others including Rep. John Lewis, D-Ga, left of Obama, walk across the Edmund Pettus Bridge in Selma, Ala., for the 50th anniversary of "Bloody Sunday," a landmark event of the civil rights movement. Some residents in the landmark civil rights city of Selma, Ala., are among the critics of a bid to rename the historic bridge where voting rights marchers were beaten in 1965. (AP Photo/Jacquelyn Martin, File)

SELMA, Ala. (AP) - Thousands gathered in this river city in 1940 to dedicate a new bridge in honor of white supremacist Edmund Pettus, a Confederate general and reputed Ku Klux Klan leader. Just 25 years later, the bridge became a global landmark when civil rights marchers were beaten at its base.

Today, with thousands protesting nationwide against racial injustice, a years-old push is gaining steam to rename the Edmund Pettus Bridge in honor of Rep. John Lewis, who led the 1965 marchers on "Bloody Sunday." But the idea is drawing opposition in Selma, including f...