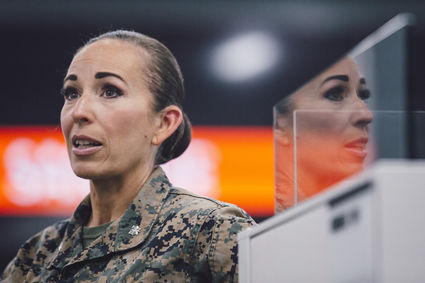 An impactful change to Marine Corps cyberspace and information technology modernization occurred June 4, aboard U.S. Marine Corps Base Camp Pendleton with the activation of 1st Network Battalion, which marked the beginning of the Marine Corps Enterprise Network Command and Control modernization implementation plan.

During the ceremony, Lt. Col. Juliet H. Calvin took command of the Marine Corps' newest battalion and made history as the first Marine to command a unit of this type, which will ensure a resilient network that enables mission execution in the face of persistent cyber threats.

The Marine Corps Enterprise Network is the Marine Corps' communications backbone that connects computers, people and related devices. The network provides robust, seamless and secure end‐to‐end communications for all Marines; from the supporting establishment to forward deployed forces.

"In this era of communication and technology, each Marine, civilian and sailor uses their respective C2 system or laptop as a key enabler of coordination and mission performance," Calvin said. "Providing operationalized unified command and control will enable resilience, agility and responsiveness, down to the tactical edge."

1st Network Battalion provides visibility down to the individual user's desktop device and enhances the Marine Corps' ability to report, monitor and improve the readiness of its network.

"MCEN C2 has been discussed for years, but now we are taking the first critical step to make this a reality," Col. Edward J. Debish, the commanding officer of Marine Corps Cyberspace Operations Group, said. "This decision creates unity of command for the security, defense and operation of the Marine Corps Enterprise Networks.

"Lt. Col. Calvin's battalion is empowered to decisively take action at the lowest level to quickly respond to the warfighter's needs," Debish said. "Her battalion will work closely with I Marine Expeditionary Force, Marine Corps Installations West and the training commands to seamlessly deliver enterprise services to our Marines."

Providing a technical advantage, the battalion relies on highly skilled Marines and civilians who work together to operate and defend the network capability. They equally share the common goal of creating agility through increased situational awareness and integration of cyber capabilities into the full spectrum of military operations.

"1st Network Battalion is the unit responsible for providing all aspects of security, operations and protection for the Department of Defense Information Network from the enterprise at the service level, down to each individual warfighter throughout the entire Western Region," Calvin said.

In today's technology-filled information environment, Marines rely on their workstations and the ability to connect to the Marine Corps Enterprise Network in any climate and any place. 1st Network Battalion is the first step in ensuring the warfighter has this access and leads the way to further innovation and successful defense of the Marine Corps Enterprise Network.

"1st Network Battalion conducts Department of Defense Information Network operations and defensive cyberspace operations in general support of I MEF, MCI West and other tenant activities in order to enhance freedom of action across warfighting domains, while denying the efforts of adversaries to degrade or disrupt this advantage through cyberspace," Calvin said. "Our daily posture in cyber must be up to task for the modern adversarial threats in cyber."

The battalion's activation is the first step in a two-year process for Marine Corps Enterprise Network C2 modernization. Later this year, two network activities are slated to stand up: National Capitol Region and Europe/Africa Region. In 2021, Marine Corps Cyberspace Operations Group plans to stand up additional network battalions in Camp Lejeune and Camp Foster; as well as a network activity for Marine Force Reserve in New Orleans. 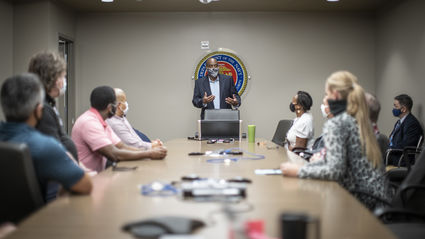