De Luz couple say man threatened them for flying a drone, claimed to be officer 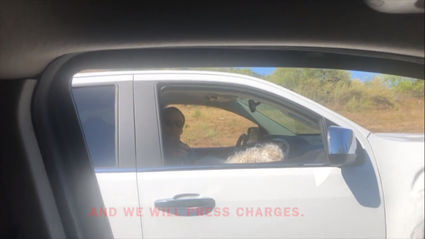 Shaunna and Dave Jengo filmed their confrontation with a man who chased them in his pickup truck after they flew a drone near his property, though the Jengos say they did nothing wrong.

It was decidedly not the way Shaunna and Dave Jengo had planned to spend their Saturday morning.

The De Luz residents had spent the morning of July 11 driving through the area to find places for Dave to fly his drone, something the pair say they do often.

It was at first a typical, uneventful Saturday adventure. They found an area off Avenida Tierra, on the Riverside County side of De Luz, where they stopped so Dave Jengo could fly his drone for what Shaunna estimated was "about three minutes" before leaving.

What the pair wasn't expecting was to be chased down by an angry property owner in a pickup truck – an encounter they filmed and posted to YouTube.

In the video, he can be seen pulling his pickup onto the wrong side of the road to confront the Jengos.

The Jengos say they are very careful not to impose on anyone's property while Dave Jengo is flying his drone, and while they have had the occasional resident complain, they say they make sure to respect all property boundaries and have usually been able to defuse tensions.

"We live out here and we understand privacy laws and issues and my husband is very, very careful not to invade anybody's property," Shaunna Jengo said. "He doesn't want to spook horses or do anything untoward and dangerous."

However, Shaunna Jengo said that was something they could not get the man in the video to understand.

He can be heard repeatedly telling the Jengos to pull over and get out of their vehicle.

The Jengos say the man threatened to shoot their drone down, though he can't be heard clearly saying that on the video.

What can be heard clearly is this:

"I can shoot my (expletive gun) out here, every (expletive) minute on my ranch," the man says.

Shaunna Jengo said via telephone July 19 that the encounter left her "terrified" and "shaken."

"Sir, you're scaring me," Shaunna Jengo, who was driving the entire time, can be heard saying in the video.

Shaunna Jengo said the man claimed to be an active law enforcement officer during the encounter, though that's also not something that can be heard on the video.

"He tried to intimidate us into complying with unlawful orders by posing as a current law officer," Shaunna Jengo said.

After the part of the encounter caught on the video, the Jengos say they drove to Temecula, where they flagged down a deputy.

But the response from the deputy was not what they were expecting.

The deputy, Shaunna Jengo said, told her "that I put (my husband) and the truck driver in a dangerous situation. I felt chastised."

Shaunna Jengo said the deputy told her the man had committed no crime.

"(The deputy) told us the man said his neighbor said our drone was bothering his horses," Shaunna Jengo said. "That's not true."

Village News is not naming the alleged assailant, as attempts to reach him before deadline were unsuccessful and he has not been charged with a crime.

Still, the Jengos think the man deserved to be arrested, and criticized the sheriff's department's response.

"We did file a complaint on Saturday," Dave Jengo said by telephone Monday, July 27.

Asked for information on what had taken place during the encounter, Riverside County Sheriff's Department spokesperson Cpl. Lionel Murphy offered the following statement July 27, a week after Village

News reached out: "I did have an opportunity to speak with a shift sergeant at the station and learned that based on the circumstances listed in the call for service, no crime had been committed. A report documenting the details of the incident is being written by the investigating Deputy. At this time, that is all the information I have available."