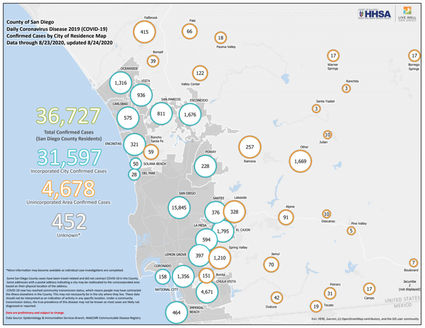 SAN DIEGO (CNS) - Even as the COVID-19 numbers continue to improve in San Diego County, with 187 new infections and no deaths reported Monday, Aug. 24, local officials said there remains no guidance from the state as far as a framework toward reopening the county -- leaving many people in limbo.

``We still have not yet received clarity,'' said County Supervisor Greg Cox. ``We do not yet know when we will get these guidelines.''

Supervisor Nathan Fletcher said the county was hoping to hear from the state this week.

The cases reported Monday raised the region's cumulative total caseload to 36,727. The number of deaths remains unchanged at 660. The 187 positive cases is the fewest reported in the county since Aug. 10, and the second fewest in the past month.

Locally, has recorded 39 cases, Pala 66 and Fallbrook 415, one more than Sunday.

Of the 7,351 tests reported Monday, 3% returned positive, lowering the 14-day rolling average of positive tests to 3.5%, well below the state's 8% guideline. The seven-day average number of tests performed in the county is 7,394.

County health officials reported five new community outbreaks on Monday, bringing the number of outbreaks in the past week to 20, tied to 73 cases. Two outbreaks were at businesses, one was at a restaurant/bar, one in a grocery store and one in a hotel/resort/spa setting.

The county will be placed back on the state's monitoring list should it be flagged for exceeding any one of six different metrics for three consecutive days. Those metrics are the case rate, the percentage of positive tests, the average number of tests a county is able to perform daily, changes in the number of hospitalized patients and the percentage of ventilators and intensive care beds available.

County-compiled data related to race and ethnicity on testing, staffing and geographic location will be made available Monday for the first time since the pandemic began. Previously, data on race had been broken down by deaths, hospitalizations and case numbers only.

Latinos are still disproportionately impacted by COVID-19, with that ethnic group representing 61.7% of all hospitalizations and 46% of all deaths due to the illness. Latinos make up about 35% of San Diego County's population.

On Monday, gyms, fitness businesses and places of worship were officially allowed to operate in San Diego city parks.

The directive defers park permit fees for 60 days. Faulconer will bring an ordinance to the council once it is back in session in September that would make the waiving of fees permanent.

The county was officially removed from the state's monitoring list Tuesday, setting in motion a 14-day countdown that could see K-12 students back in the classroom as soon as Sept. 1, depending on the decisions of individual school districts.

Currently, 27 schools -- mostly private religious schools -- have been approved for in-person learning by the county.

The schools include Calvary Christian Academy, Francis Parker School, Chabad Hebrew Academy, San Diego French American School, La Jolla Country Day School and others. They were among nearly 50 schools that applied for a waiver to the county's public health guideline regarding in-person teaching.