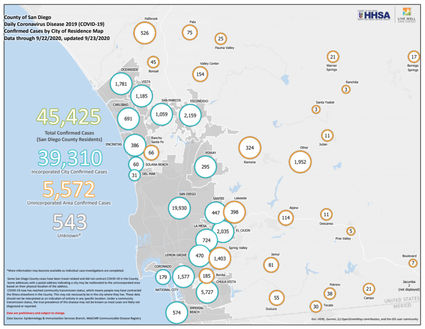 Three men and three women died between Sept. 17 and Sept. 22, and their ages ranged from mid-50s to early 90s.

Of the 13,609 tests reported Thursday, just 1% returned positive, lowering the 14-day rolling average percentage of positive cases to 3.4%. The county has averaged 8,828 daily tests over the past week.

San Diego State University reported 20 of Thursday's new cases were connected to the university, which now has 933 total confirmed or probable cases -- including four employees and 13 visitors to the campus.

The number of community outbreaks remains above the trigger of seven or more in seven days. A community setting outbreak is defined as three or more COVID-19 cases in a setting and in people of different households over the past 14 days.

The county narrowly avoided being dropped to the dreaded "purple'' tier of COVID- 19 reopening Tuesday, with 6.9 new daily cases per 100,000 population, just 0.1 away from the state's most restrictive tier.

San Diego County will remain in the red tier at least until next Tuesday, according to state officials.

Even as San Diego County grapples with COVID-19, the county's Public Health Officer Dr. Wilma Wooten warned residents to be prepared for another health threat: influenza.

Last flu season, the county reported 108 deaths from the illness. Health officials are concerned that a combination of flu season and the ongoing COVID-19 pandemic could place stress on the health care system. Wooten encouraged residents to be safe, but to get a flu vaccine.

``The same strategies to avoid COVID-19 work for the flu,'' she said.

``The difference is that we do not have a vaccine for the coronavirus, but we do for the flu.''

The news Tuesday that San Diego will stay in the red tier came as somewhat of a surprise after increasing COVID-19 numbers appeared to set the county on a path toward slipping into that most restrictive tier -- which would shutter indoor operations for restaurants, movie theaters, houses of worship and gyms, limit retail businesses to just 25% capacity and have major impacts on indoor business for most other industries until the county can improve its numbers.

Despite the good news about remaining in the red tier, the county is hovering on the brink of being downgraded. State rules require a county be

above one of the two metrics -- daily case rate by population and positive test rate -- for two consecutive weeks before it can be moved.