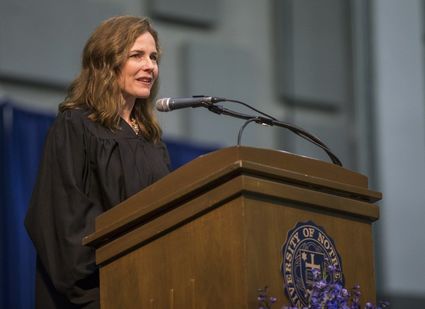 In this May 19, 2018, file photo, Amy Coney Barrett, U.S. Court of Appeals for the Seventh Circuit judge, speaks during the University of Notre Dame's Law School commencement ceremony at the university in South Bend, Indiana. South Bend Tribune via AP.

President Donald Trump nominated Judge Amy Coney Barrett to the Supreme Court Saturday, Sept. 26, capping a dramatic reshaping of the federal judiciary that will resonate for a generation and that he hopes will provide a needed boost to his reelection effort.

Barrett, a former clerk to the late Justice Antonin Scalia, said she was "truly humbled" by the nomination and quickly aligned herself with Scalia's conservative approach to the law, saying his "judicial philosophy is mine, too."

Barrett, 48, was joined in the Rose Garden by her husband and seven children. If confirmed by the Senate, s...