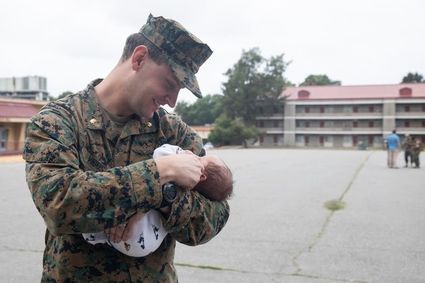 U.S. Marine Corps Maj. Scott Vigus, forward air controller with Battalion Landing Team 1/4, 15th Marine Expeditionary Unit, holds his newborn son for the first time during a homecoming event at Marine Corps Base Camp Pendleton, California, May 20, 2021. The 15th MEU returned from a seven-month deployment to the U.S. 3rd, 5th, 6th, and 7th Fleet areas of operation, serving as a crisis-response force for combatant commanders in the Africa, Central and Indo-Pacific commands.

Marines with the 15th Marine Expeditionary Unit embarked aboard the ships of the ready group and arrived Friday to disembark at Camp Pendleton, the U.S. Navy said.