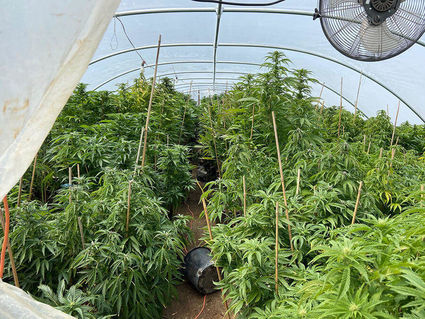 As required by the state Environmental Quality Act (CEQA), the board voted to require a program environmental impact report (PEIR). The two-year

According to the county Land Use & Environment department, the review process ``would cover the broadest scope of cannabis operations ... (and)

begins the work to open the cannabis industry's commercial opportunities to more businesses.''

As the county moves closer to voting on a revamped marijuana policy, Board Chairman Nathan Fletcher described Wednesday's action as a challenge.

``This is not easy to align all these various components and parts'' in crafting new ordinances, Fletcher said, adding he was ``really pleased to

see our county moving forward on this issue.'' He said it was also important to step up enforcement on unlicensed dispensaries.

facilities in unincorporated county areas -- Outliers Collective in El Cajon; Ramona Cannabis Company and Releaf Meds, both in Ramona; and OutCo and San Diego Natural Inc., both in San Diego.

The changes would allow the permit holders to operate past April 14, 2022; expand their facilities up to 10,000 square feet; transfer business

licenses; and sell edibles and drinkable cannabis products. The revisions will be presented to the board for final approval in October.

Ren Bowden, of San Diego Releaf, said that even though the Board of Supervisors voted in 2017 to ban cannabis businesses in the unincorporated

parts of the county, his store added a sidewalk and street lights in an effort to be responsible.

``We've been able to document everything,'' Bowden said. ``We are all learning together, and that's understandable because this is a new industry.

We're asking to be granted the rights we had originally.''

Greg McCluskey, owner of the Ramona Cannabis Company, said it makes sense to allow rural facilities to sell edibles, rather than having residents

drives many miles into San Diego to purchase them.

McCluskey said cannabis improved the life of his 81-year-old grandmother as she fought cancer, and that while he opposed marijuana use just

five years ago, acknowledged that ``it changed my life.''

``Five to 10 years from now, most people or someone they love are going to need cannabis,'' he said.

Supervisor Jim Desmond was the lone ``no'' vote on both measures passed Wednesday.

``I just don't agree we can support this type of industry, especially with on-site consumption,'' Desmond said, adding that the number of drug-

related deaths San Diego County are at an all-time high, based on a recent official report.

The county is dealing with mental health and homeless crises, which drug use only exacerbates, he said, urging all stakeholders and planning groups

to request more restrictions and setbacks for future marijuana facilities.

As for medical cannabis use, ``I think that's a great idea -- but you should get that from a pharmacy or (doctors),'' he said.

Supervisors have yet to approve a full marijuana policy overhaul, first introduced in January, in the form of multiple ordinances still under

development and will include community input before any final approval.

If passed later this year, the ordinances will permit expanded farming, manufacturing and retail opportunities, and create jobs in the

The ordinance change is part of Fletcher's ``Framework for the Future of San Diego County'' plans, intended to prioritize communities and populations in San Diego that have historically been left behind.

While marijuana industry advocates and some social justice groups support the policy change, there has also been strong opposition from regional

Opponents who called in during Wednesday's meeting warned against loosening up restrictions on marijuana cultivation and retail.

Rancho Bernardo resident Becky Rapp said that while she while appreciates county staff creating an environmental review, it wouldn't be

enough to protect fragile ecosystems against the damage caused by more pot farms.

This county's ecosystem is diverse and home to animal and plant species ``found nowhere else on earth,'' Rapp said.

Other opponents said with California already facing a major drought this year, it made no sense to increase another water-intensive industry.

ordinance, as they do for marijuana growers.