Car goes over embankment in crash on Mission Road 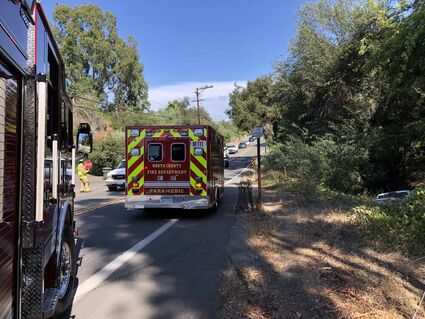 NCFPD arrived on scene to rescue a driver who drove down the embankment to avoid crashing into the car in front of them.

Emergency crews were at the scene of a solo traffic accident that left a vehicle over the side of the roadway and 20 feet down an embankment in the 1400 block of East Mission Road in Fallbrook, according to NCFPD PIO John Choi. The call came in at 3:06 pm and roadways were completely open and car was removed by 3:56 pm.

Motorists experienced delays on East Mission as it was reduced to one lane while NCFPD first responders rescued the driver. The driver had minor injuries and refused to be transported to the hospital. It was reported that the car exited the street in order to avoid hitting the car in front that had slowed or come to a stop.

The lane was closed again after the tow truck arrived and was retrieving the car from the embankment.