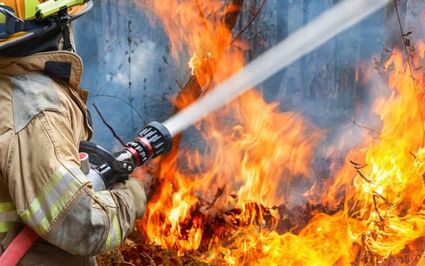 FALLBROOK (CNS) - Two residents of a Fallbrook apartment were injured today in an explosion and fire inside a bedroom.

The fire was reported at 1:32 p.m. Sunday at a two-story apartment complex at 1433 S. Mission Road, according to Capt. John Choi of the North County Fire Protection District.

Residents said an explosion blew out a window of an upstairs apartment, Choi said.

Three fire engines from the NCFPD along with one engine from the Vista Fire Department put out the fire in the bedroom in about 20 minutes, the captain said.

A man, a woman and their dog all escaped from the burning apar...