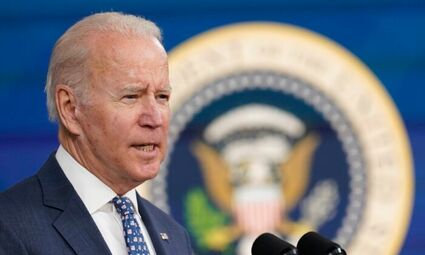 The United States will restrict travel from South Africa and seven other African countries on Monday, Nov. 29, in a bid to control the spread of a new COVID-19 variant.

A proclamation from President Joe Biden said travel will be curbed from Botswana, Zimbabwe, Namibia, Lesotho, Eswatini, Mozambique and Malawi in addition to South Africa.

American citizens and lawful permanent residents will still be allowed to enter the United States from those countries.

"It is the policy of my administration to implement science-based public health measures, across all areas of the federal government, to act swiftly and aggressively to prevent further spread of the disease," Biden said, adding that the move was recommended by health officials.

Dr. Anthony Fauci was one of the officials who met with Biden before the proclamation was released, the president told reporters while on vacation in Massachusetts.

The restrictions will remain in place until Biden decides to terminate them.

The World Health Organization on Friday, Nov. 26, dubbed the new strain Omicron and described it as heavily mutated. The U.N. health agency said the variant may be able to reinfect individuals who were previously infected with COVID-19.

The European Union, Israel, the UK, Japan and other countries announced Friday that similar travel restrictions will be placed on southern African nations.

In a statement, WHO said the variant, which was discovered in South Africa on Wednesday, Nov. 24, has led to a rise of infections in the country.

"The epidemiological situation in South Africa has been characterized by three distinct peaks in reported cases, the latest of which was predominantly the Delta variant," WHO said in its statement. "In recent weeks, infections have increased steeply, coinciding with the detection of the B.1.1.529 variant."

The U.N. health agency did not say whether common COVID-19 vaccines are effective against the Omicron variant, although the statement suggested that individuals should still receive the shot. Some scientists have said that due to the number of mutations, the strain may be able to penetrate through vaccines.

India, Turkey, Switzerland and the United Arab Emirates also tightened travel curbs on Nov. 26. But WHO officials said that travel restrictions may be premature. "It's really important that there are no knee-jerk responses here," WHO's emergencies director Mike Ryan said.

Officials in Belgium said the Omicron variant was discovered in the country, possibly the first confirmed case in the European Union so far.

Health Minister Frank Vandenbroucke told a news conference that the variant was found in an individual who had developed symptoms and tested positive on Nov. 22.

"It is a suspicious variant. We do not know if it is a very dangerous variant," he told reporters.

Worries about the impact the variant might have, including government-mandated lockdowns, sent stock markets spiraling on Nov. 26. Such concerns especially caused stocks of airlines and others in the travel sector, and oil to tumble.

Reuters contributed to this report.