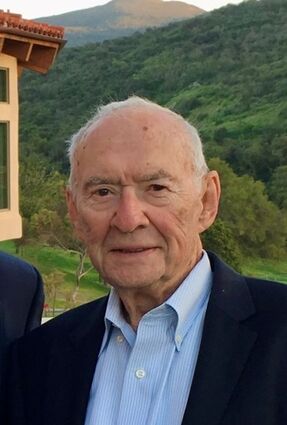 Dr. Thomas E. Aspel, DDS, passed away peacefully in Oceanside, California, at age 92. He was born in Madison, Wisconsin to James and Mary Aspel. He had four siblings.

At a young age, he started delivering newspapers, setting bowling pins, washing bottles, or working as a caddy – where he learned to golf, a game he enjoyed for life. He earned his way through college at Marquette Dental School selling pots and pans, mopping hospital floors, and pouring cement in his own sidewalk company. He served in the US Air Force with the Dental Corps, mostly in Japan.

After military duty, he completed his degree in orthodontics at the University of Iowa. There, he met his first wife, Barbara Olson, and they moved to Vista, California, where he opened his practice in 1960. With their family of four children, they relocated to the Fallbrook/Bonsall area in 1965.

Shortly after, he moved his practice to offices in Fallbrook and Oceanside. Dr. Aspel enjoyed supporting his patients, especially bidding on their FFA or 4-H animals at the Del Mar Fair. Many remember his vocabulary contests, where everyone took home a dictionary, win or lose. In 50 years of practice, he created thousands of smiles. He is also remembered at his "second home," the Vista Valley Country Club, which he joined as an original member in 1979.

His wife passed away in 1988 and he later married Claudine Lam. They spent 30 years in partnership, working and traveling together. He will be remembered for his great joke-telling, his extreme generosity, for cultivating lasting friendships and especially for being a loving family man.

A family celebration will take place later this summer. To those wishing to donate in his memory: The Angel Society of Fallbrook – Scholarship Fund (PO. Box 1408, Fallbrook, CA 92028) or to a charity of your choice.