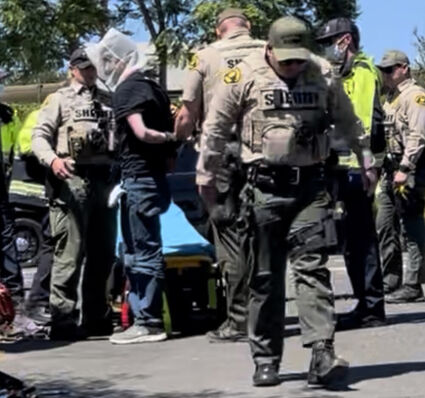 Man who was wielding a tool, stealing mail and taunting cars on E. Mission dons a spit mask after fighting with officers, including spitting on them.

A man who attacked an officer this afternoon at about 2 pm near 1005 E. Mission Rd was detained and transported to Temecula Valley Hospital. Two calls came into 911, according to a deputy on the scene. One of the callers described the subject walking westbound on E. Mission Rd. taunting cars to hit him and taking mail from residents' mailboxes along E. Mission. He was also observed to be carrying a hammer.

"A sheriff arrived and pulled a little way in front of the man and gave him a command. The subject had a hammer in his hand and approached the officer in a threatening manner. The offic...