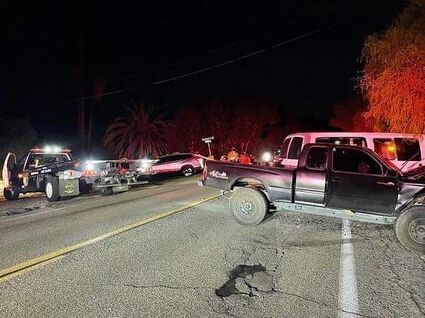 There were two crashes Sat. night. This photo was from a single vehicle non-injury crash on Stage Coach and Ranchwood lane. A driver struck a utility pole.

FALLBROOK - A motorcyclist was struck by a vehicle and killed tonight, Saturday, Nov. 12 in a hit-and-run crash in the S. Mission Rd area between Via Monserate and La Canada Dr. The motorist who fled the scene was later located according to the CHP.

According to a Tesla driver who was on the scene, "A T-100 pick-up pulled out from LaCanada into South Mission Rd., heading south in front of a motorcycle rider who ran into the truck and ricocheted onto my car (the Tesla) and was thrown into the ravine (next to South Mission Road). I stopped and was trying to find the rider but it was dark."

It was reported by the Tesla driver that a T-100 license plate was found on the scene. CHP reported making contact with the T-100 owner and taking him into custody.

According to the Tesla driver, it was caught on his Tesla camera and the CHP has taken the Tesla as well as its camera in as evidence.

The crash was reported at 5:46 p.m. in the 4500 block of South Mission Road, according to the California Highway Patrol.

There was a hard closure of both north and southbound lanes of Mission Rd for several hours. This is an early version story.

FALLBROOK, Calif.- On Saturday, November 12, 2022, at approximately 5:45 p.m. The California Highway Patrol-Oceanside Area Office responded to a fatal hit-and-run collision in the 4500 block of South Mission Road, in Fallbrook.

A 32-year-old from Fallbrook was riding a black Harley Davidson motorcycle northbound on South Mission Road, south of La Canada Road. A 33-year-old from Fallbrook was driving a black Toyota T-100 pickup truck westbound on La Canada Road, at the intersection with South Mission Road. For reasons still under investigation, the driver of the Toyota pickup pulled into the intersection and collided with the Harley Davidson motorcycle. This collision pushed the motorcycle into the southbound lane of South Mission Road, where it collided with a grey Model S, Tesla. Following the collision, the driver of the Toyota pickup fled the scene.

The California Highway Patrol, Deputies from the San Diego County Sheriff’s Office and Fallbrook fire/ paramedic personnel responded to the scene. Unfortunately, the rider of the Harley Davidson motorcycle was pronounced deceased at the scene. No other injuries were reported.

At approximately, 6:30 p.m., the 33-year-old male driver, Francisco Esteban Rodas, was located by officers of the California Highway Patrol-Oceanside Area, at his residence. Mr. Esteban Rodas was subsequently arrested and booked into the Vista Detention Facility, where he faces multiple charges related to this incident including felony driving under the influence (DUI) and felony hit and run.

South Mission Road at La Canada was affected from the time of the collision to approximately 1:00 a.m., while the scene was investigated. This incident remains under investigation. Any member of the public who witnessed this incident is encouraged to contact the CHP at 760-643-3400.