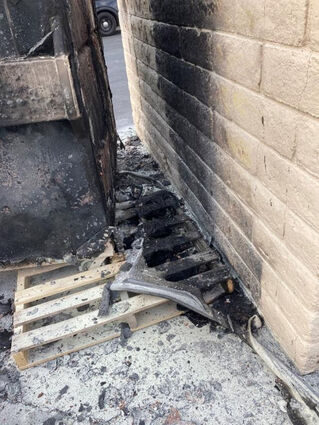 The first fire outside a grocery store on South Mission Road was reported around 9:30 a.m., Nov. 17. Grocery store employees were able to put out the fire using extinguishers before it spread to the building.

FALLBROOK – A man is under arrest for starting two fires in Fallbrook.

It happened on Thursday, Nov. 17 behind a grocery store in the 1100 block of South Mission Road.

The first fire was reported around 9:30 a.m. Grocery store employees were able to put out the fire using extinguishers before it spread to the building.

Hours later, just before 4 p.m., a second fire was reported in a dumpster just feet away from where the first one started.

Deputies with the Fallbrook Sheriff's Substation, detectives with the Sheriff's Bomb/Arson Unit and the Deputy Fire Marshal with the North County Fire Protection District responded to the scene. A San Diego County Sheriff's Department spokesperson said they "would like to thank our partner agencies for collaborating on this case."

Alexis Lopez (DOB 2/12/1999) was arrested on Saturday, Nov. 19 in Fallbrook after surveillance video linked him to the fires. He has been booked at the Vista Detention Facility on two counts of arson to property.

The Sheriff's Bomb/Arson Unit is urging anyone who has information about this case or might know of other fires related to these incidents to call the Sheriff's Department at (858) 565-5200.

They can also call San Diego County Crime Stoppers at (888) 580-8477. Callers can remain anonymous and be eligible for up to a $1,000 reward for information that leads to a felony arrest.

Submitted by the Sheriff's Bomb/Arson Unit.