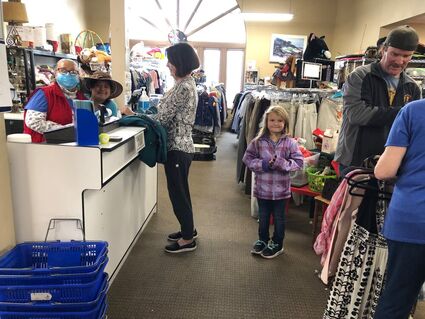 At the Angel Shop checkout, from left, longtime Angel volunteer/cashier Eufemia Carreno and student volunteer Meira Acevedo help Cheryl Pizzo, a board member and volunteer, with her purchases as Brett Kell, far right, and daughter Canon finish their shopping.

FALLBROOK – The Angel Society of Fallbrook is looking forward to a landmark year in 2023, when it will celebrate its 45th anniversary and a generous philanthropy program that continues to thrive.

Since its new fiscal year started on May 1, the group's board of directors has dispersed a total of $86,700 in philanthropic funds to community nonprofits and other worthy causes. A 501C3 nonprofit organization, the Angel Society hopes to surpass in 2023 its total of $146,700 in monetary donations awarded during its previous fiscal year from May 1, 2021, to April 30, 2022. Since its inception in 1978, the group has raised more than $4.4 million in giving to the greater Fallbrook community.

"We are so appreciative of the help and support of our community," said Louise Small, Angel president. "We could not be as successful as we are without the support of everyone, from our members and volunteers to our donors and shoppers."

The Angel Society's philanthropic funds are primarily generated through the operation of the Angel Shop, a thrift store in Fallbrook that is staffed entirely by volunteers. Since the pandemic, when the shop was closed for nearly three months in 2020, it has continued to operate with fewer volunteers. As a result, the shop's hours of operation were reduced from its former six days a week to five. The shop is open from 10 a.m. to 2 p.m. Tuesday through Saturday, with donations gratefully accepted until 1:30 p.m.

Billie Foli, who retired from the Angels' board of directors in August 2021, passed away Dec. 29 at age 91. She was a member of the board since 1990 and continued to work in the Angel Shop until this year, even volunteering as cashier on Saturdays, the Shop's busiest day. Foli's legacy with the Angel organization included two terms as president. She also helped shepherd the group's move to its current shop location, a former bank building on the corner of Main and Aviation that was purchased by the Angels in 2007.

Foli was also known for inspiring volunteers with shop "stories," including one that took place during the holiday season when she and other volunteers stayed after hours to outfit a mother and her daughters for a wedding. The family not only found the mother a perfect wedding dress at the shop, but also three bridesmaids' dresses in burgundy, plus matching shoes for her daughters, in each of their sizes. It truly was a "Christmas miracle," as Foli recalled, especially since one of the girls wore a size 14 shoe.

A celebration of Foli's life is planned for next year, according to her daughter, Fran White, a member of the Angels' board of directors since 2006. 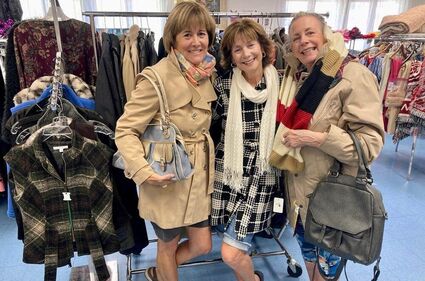 From May 1 through December, the Angel Society distributed philanthropic funds to 36 organizations around North County including sports teams, schools, local nonprofits and veterans groups.

Requests for philanthropic funds should be made in writing to the Angel Society, c/o Philanthropy Chair, P.O. Box 1408, Fallbrook, CA 92088. Interested volunteers are encouraged to visit the Angel Shop, where they can pick up an application. It costs $20 annually to become a member of the Angel Society.

The Angel Society's annual meeting and luncheon for members will be held next year in June. For more information, email [email protected] or visit http://www.theangelsociety.org.

Submitted by the Angel Society.