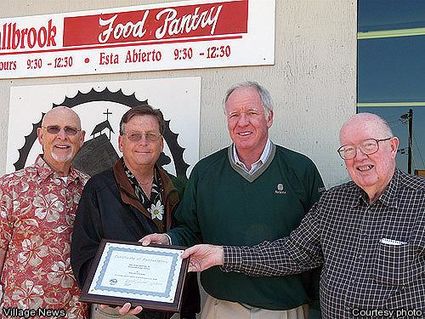 Fallbrook Food Pantry Board of Directors Don Luallin, right, and Arnie Willcuts, left, present Owen Cowing and Joe Ouellette with a Letter of Appreciation for their group

FALLBROOK- Joe Ouellette, together with a planning committee consisting of Jim Tudor, Owen Cowing, John Vince, and John Paget, launched ‘Share The Harvest’ inaugural golf tournament to be held in October of 2007. Unfortunately, due to the wildfire, the tournament had to be postponed to a later date. The event was eventually held at the Golf Club of California, had 80 players, and generated over $13,000 for the Fallbrook Food Pantry.