'Big Del Burrito' challenge is back 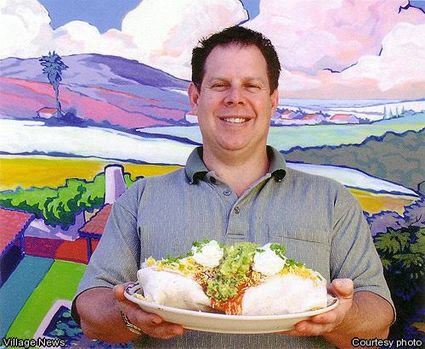 FALLBROOK — This is the seventh year of the “Big Del Burrito” challenge at La Caseta Mexican Restaurant. Last year, Erik Poole, a three-time champion record-holder, consumed the “Big Del” in an incredible three minutes and 40 seconds, beating his own previous record.

Thirty-eight other intrepid eaters also attempted to devour the four-pound burrito but only 24 managed to win the challenge by eating the burrito in the one hour allowed.

The challenge is offered only once a year during the Avocado Festival in commemoration of the 1992 Avocado Festival, when La Caseta built a giant 2,237-pound burrito that made the Guinness Book of World records four years in a row.

The rules of the challenge are simple:

1. A contestant cannot leave the table after the burrito is served.

2. Contestants have to eat “the whole thing.”

3. There is a one-hour time limit to eat the burrito.

4. Contestants must be 18 years or older.

Winners get their picture taken for an honorary bulletin board and their names on a commemorative wall plaque. The winner of the fastest time for this year’s challenge will receive a dinner for two at La Caseta and, if they break the current record, they will receive a record-holder t-shirt.

La Caseta will be open on Avocado Festival Sunday, April 20, from 11 a.m. to 4 p.m. for lunch and burrito challengers.