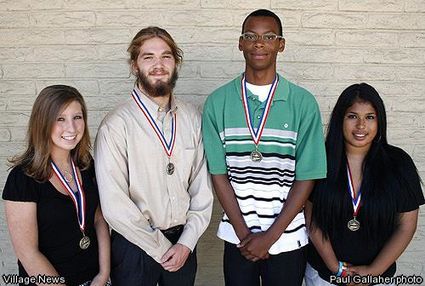 Caitlin Ferguson, James Newman and Stuart Reeder of Fallbrook High School and Brianna Vega of Ivy High School were honored as the Fallbrook Community Students of the Month at a special breakfast event October 2 at Fallbrook Golf Club’s Hukilau Restaurant.

The students were recognized individually for their accomplishments and presented with numerous certificates of achievement and gifts from businesses and service organizations within the community, including customized medals depicting the Lamp of Knowledge, presented by American Legion Post 365.

“We want to express appreciation to the community for supporting and recognizing our students,” said Dr. Dale Mitchell, the new superintendent for Fallbrook Union High School District (FUHSD). “These are challenging times and students like these show there really is cause for optimism.”

Event emcee Sue Johnson agreed, saying, “Our future is sound because the students we have here today are going to be doctors, teachers and leaders for the future.”

Caitlin Ferguson was selected for the Student of the Month honor as the result of a nomination by Fallbrook High teacher and coach Marco Arias.

“Caitlin came into my classroom very shy but always with a smile,” Arias said. “I have seen the genuine care she demonstrates for her fellow students.”

Arias said Ferguson is consistently praised by teachers and demonstrates outstanding citizenship. Upon graduation from high school, she said she hopes to attend University of California at San Diego.

“She is going to make a heck of a doctor,” Arias said, smiling.

Ferguson was appreciative of the recognition and paid her respects to Arias.

“I want to thank Mr. Arias because he’s been a big support to me,” she said. “It’s teachers like him that help build your character and the type of teacher you never forget.”

“James is a stellar student with an amazing GPA [grade point average],” said Thomas. “He is very proactive in getting things done and always does the right thing. He is what we call ‘100 percent, 100 percent of the time.’”

Newman is active in the Marching Warriors band and leads a busy lifestyle. He has served as an assistant in the principal’s office. He was described as a young man of “positive action but few words,” one that his peers can look up to.

“I want to thank the community for acknowledging students at the high school,” Newman said. “My future plans are to go to college.”

Stuart Reeder was nominated for Student of the Month by Fallbrook High teacher Pam Munro.

“Stuart is brilliant and a leader in his class,” Munro said. “I quickly realized he has a passion for learning and it is infectious. He raises the bar in his classes.”

Reeder holds the rank of Life Scout in Boy Scouts of America and enjoys sailing and photography. He serves as Webmaster for the local chapter of the Retired Teachers Association, has served on mission trips to Mexico and volunteers his time as a concert organizer.

“I want to thank everyone for their time and the awards I am being given,” Reeder said. “Mrs. Munro is an amazing teacher.”

In discussing his plans for the future, he said, “I hope to get into Cal Tech because I want to become a scientist.”

Brianna Vega was suggested for the distinction of Student of the Month by Ivy High School teacher Sherri Ryan.

is bright, beautiful and an amazing person,” Ryan said. “Every teacher at Ivy has nominated her for an award. She has a great heart and spirit.”

Vega is on track at Ivy High to graduate this spring and has consistently demonstrated an outstanding, mature work ethic and good attendance. She was recognized for volunteering a year of her time to help younger students with their homework after school at the Boys & Girls Club.

“I want to thank everyone for giving me this opportunity,” Vega said. “In the future I am interested in going to cosmetology school, culinary school and learning more about business.”

The Fallbrook Community Student of the Month program has begun its 12th year and has honored 379 outstanding students to date. The program is organized and implemented by a committee of the same name and is funded by numerous local businesses and organizations.