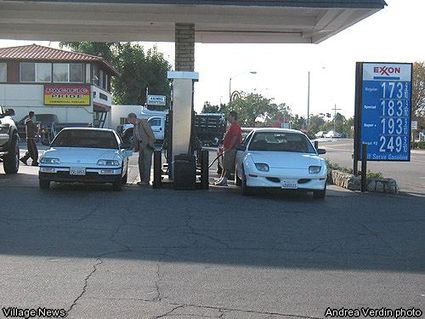 Motorists purchase regular unleaded gasoline for $1.73 per gallon at the Exxon station (Main Street Gas) in Fallbrook on December 11.

For the first time in nearly five years, Southern Californians are seeing gas prices dip well below $2 a gallon, making trips to the gas station easier to bear.

This places current gas prices at $2.77 below the all-time monthly record high of $4.585 set in July of this year.

The last time the Southern California average monthly price was lower than the current average was in January of 2004, when it was $1.737.

This month, the statewide average price of $1.799 for unleaded gas is 72 cents lower than the November average of $2.522.

Alaska, Hawaii and New York are now the only states with price averages above $2 a gallon.

Fallbrook residents are reaping the benefits of seeing lower prices at the pump, as local gas stations are starting to reflect the price drop.

But to get the lowest price possible on gas, it may take a bit of driving around to find which gas station in town will give you the best deal.

On Thursday, December 11, we found the lowest-priced gas at the Arco gas station in Bonsall, where drivers were charged $1.61 a gallon for regular unleaded.

In downtown Fallbrook, the Arco station at Main and Ammunition was charging $1.69 a gallon for regular unleaded.

Exxon (Main Street Gas) and 7-Eleven both offered regular unleaded for $1.73 a gallon, with Shell on the high end at $1.83 a gallon.

“Californians are now paying lower average gas prices than residents of 12 other states, including much of the Northeast as well as Nevada, Washington and Oregon,” said Auto Club spokesperson Jeffrey Spring. “It’s an unusual situation for this state to have prices within a dime of the national average, but it is a welcome bit of relief for Californians who have been particularly hard hit by the economic downturn.”

However, residents want to continue to see gas prices fall to prices that are easier on the budget; as a matter of fact, one consumer said he felt gas still wasn’t low enough for his liking.

“When I moved to California, gas was 25 cents a gallon,” he commented.