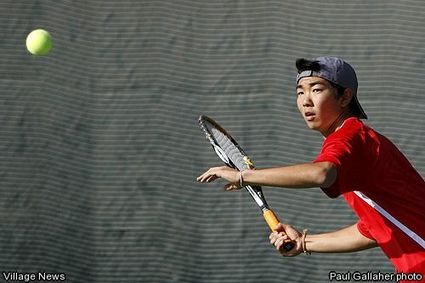 The 2009 boys’ tennis season will be Bill Lenaway’s 21st year as a varsity head coach and his first at Fallbrook High School.

Lenaway spent 20 seasons as the girls’ varsity tennis coach at Quartz Hill High School in the Antelope Valley and 19 years as the boys’ varsity coach with the Rebels, including the 1992 season in which he won the CIF Southern Section 2A Division championship.

Lenaway, who is a math teacher as well as a coach, secured a faculty position at Fallbrook High School for 2007-2008, ending his tenure as the Quartz Hill coach.

“It was more for family than anything else,” he said of the move from Antelope Valley to Fallbrook. “The school I was teaching at was great; I had no problem with it.”

Lenaway immediately took over as the junior varsity coach of Fallbrook High School’s girls’ tennis team in fall 2007, returning in that capacity for the 2008 girls’ season.

In spring 2008 he was the assistant varsity coach for the Warrior boys’ netters. Boys’ varsity head coach Andy DeSouza returned to upstate New York after the 2008 season and Lenaway inherited the boys’ varsity.

“I’ve got a great group of kids. They’re hardworking,” Lenaway said. “I’ve had nothing but fun with these guys. I’m pushing them pretty hard and they are responding in the ideal way.”

Lenaway was raised in northern Indiana and played tennis in high school. He spent his college years at Purdue University but did not play any sports due to his need to work as well as to study.

He moved to California after his graduation from Purdue.

He also coached basketball at Quartz Hill for 14 years. “Being from Indiana it kind of just happens,” he said of basketball.

Lenaway was never a head varsity basketball coach. He also spent one year as an assistant track coach, working with the Quartz Hill sprinters.

In addition to having a new head coach, Fallbrook’s tennis team also has a realigned Avocado League which pits the Warriors against powerhouses Torrey Pines, La Costa Canyon, and San Pasqual. 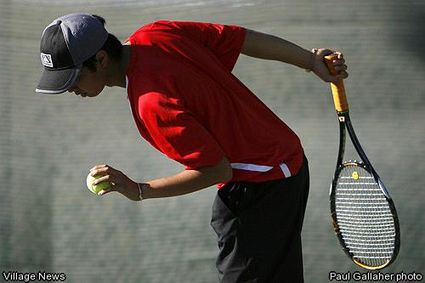 Adachi prepares to serve to Shooter. The match was held at Fallbrook Tennis Club, which is the Warriors

“It’s a tougher league than we were in last year,” Lenaway said.

Fallbrook was undefeated in 10 Avocado League matches during the 2008 season and had a 15-5 overall season record after losing to Rancho Bernardo in the CIF Division I quarterfinals.

“I’m just pleased with what’s been going on so far,” Lenaway said of the Fallbrook boys’ team.