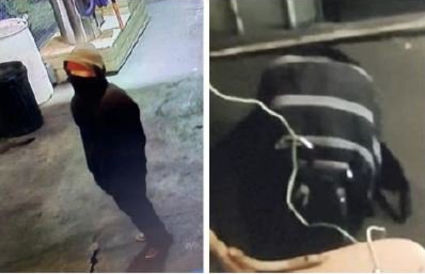 The sheriff's department said the man in this photo is suspected of stealing surveillance cameras from Fallbrook businesses. The photo of the backpack reportedly belongs to the suspect.

FALLBROOK - The San Diego County Sheriff's Department's Fallbrook Substation sent out a request for the public's help in identifying a man they say stole security cameras from a local business and may be responsible for stealing more.

The report stated, "Surveillance cameras have been stolen three times recently from businesses on Main Avenue in Fallbrook."

The notice said that at 5:20 a.m. on Jan. 2, the masked man in the photo stole a security camera from the 24-hour Max Car Wash in Fallbrook and that the photo of a backpack also belonged to the suspect. Two other known surveillance camera thefts occurred on Main Street during nighttime hours.

Anyone with information is asked to report to Detective Ashkar at the sheriff's station by calling (760) 451-3100.