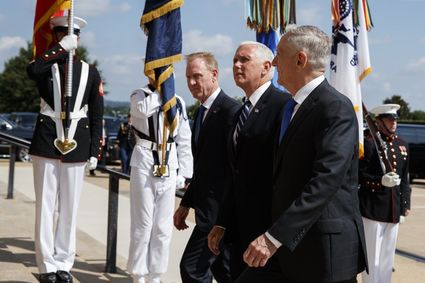 In this Aug. 9, 2018, file photo, Vice President Mike Pence, center, is greeted by Deputy Secretary of Defense Pat Shanahan, left, and Secretary of Defense Jim Mattis before speaking at an event on the creation of a United States Space Force at the Pentagon. With his demand that the Pentagon create a new military service – a Space Force to assure "American dominance in space" – President Donald Trump has injected urgency into a long-meandering debate over the best way to protect U.S. interests in space, both military and commercial. AP Photo/Evan Vucci photo

In signing the 2020 National Defense Authorization Act that includes Space Force, Trump claimed a victory for one of his top national security priorities just two days after being impeached by the House.

It is part of a $1.4 trillion government spending package – including the Pentagon's budget – that provides a steady stream of financing for Trump's U.S.-Mexico border fence and reverses unpopular...