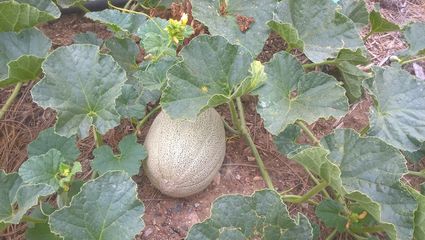 So I'm a seed saver. That can be a good thing or a bad. This year, for me, it was a little bit of both.  The good, or benefit, is that I collect seeds each year from the plants I let flower, such as cilantro, parsley, arugula and dill. If I don't harvest the seeds soon enough some will fall to the ground and plant themselves. That too can be good or bad, because although I appreciate the help, they don't always choose the location or quantity that I might!

But let's get back to what is bad about seed saving - ending up with old seeds. When I buy seeds, I don't often plant the whole package. My first year as a gardener I did and ended up with about 14 or 15 zucchini plants. You can imagine the explosion.

So now when I over buy seeds, which I tend to do because everything always looks like so much fun to try, and either don't plant the entire package or share with a friend, they go into my seed box to save for an intended future planting.

That is what happened to me this year.

I had two packages of corn, my favorite "silver queen," which due to a lot of fall travel last year, never got planted, along with another hybrid. I attempted to sprout one set before planting as I usually do, on damp paper towels in the warm dark of my garage. Every one of them molded and not a single sprouted.

Discouraged by the delay, I decided to plant the next package directly in the ground.  Again, failure. Just one out of 18 sprouted.  I knew that I had taken a risk trying to be thrifty using the out of date seeds, so decided it was time to purchase two 6-packs of baby corn plants, something I had never done before. But since I was so late planting, I wanted to save three to four weeks of waiting for them to sprout and grow to the size that I could buy.  I saw some at local garden supply stores earlier in the season, but now when I was in need, they appeared to be long gone.

All vegetables and vegetable seeds I have found are in short supply this year and it took me multiple stops at multiple stores to finally lay my hands on one of the last seed packages of "candy corn."

So now, staring down July, I am patiently awaiting my first sprouts. I am grateful that here in Fallbrook corn can be planted for successive harvests late into the summer, as I have in the past tried to time my last crop for a Thanksgiving corn pudding. And so I wait. 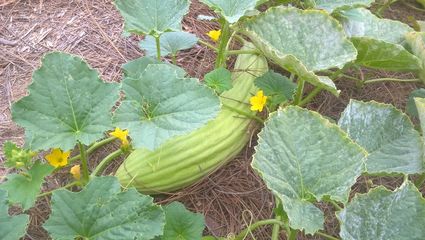 Armenian Cucumber - Can grow to 1 foot, skin is edible

I won't be eating corn on the 4th of July. I'll be lucky to see any ears by Labor Day, but I already have the ground ready and waiting to use the other half of my seed package in about three weeks. I don't plan to save any of the seeds for next year!

For now, we will enjoy the other warm weather crops that are producing like mad; Italian and yellow zucchinis, pole and bush green beans, cucumbers, eggplant, bell peppers and poblanos, about a zillion tomatoes and their perfect companion, basil.  The cantaloupe and watermelon and honeydew are not far behind.  I noticed that none of my soybeans sprouted and then remembered that those too were old seeds.

Backyard gardens have always been popular in Fallbrook, but this year I think especially so. I am marking my calendar now to start shopping for new winter veggie seeds in September. I won't count on using the leftovers in my seed box this fall.