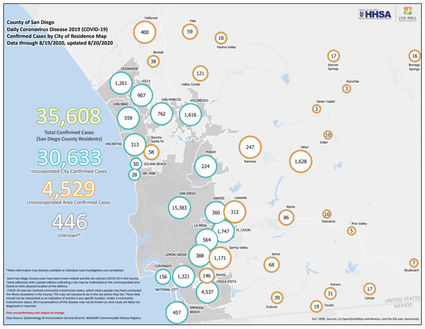 Of the 9,865 tests reported Wednesday, 2% returned positive, lowering the 14-day rolling average to 4%, well below the state's 8% guideline. The 7-

Locally, Bonsall has reported 38 cases, Pala 59, and Fallbrook 400, five more than the day before.

County health officials reported three new community outbreaks Wednesday, bringing the number of outbreaks in the past week to 16.

The county continues to keep confidential the names and locations of businesses with outbreaks.

``Avoiding businesses where an outbreak has been identified does not lower your risk of infection,'' said Dr. Wilma Wooten, the county's public health officer. ``If there was a specific threat to public health, we would release that information.''

The number of community outbreaks remains well above the county's goal of fewer than seven in a seven-day span, although Wooten thanked the public for adhering to health guidelines to significantly reduce those numbers. A community setting outbreak is defined as three or more COVID-19 cases in a setting and in people of different households in the past 14 days.

The county was officially removed from the state's monitoring list Tuesday, setting in motion a 14-day countdown that could see K-12 students back in the classroom as soon as Sept. 1, depending on the decisions of individual school districts. However, what that means for businesses was still unclear.

County Supervisor Nathan Fletcher said he and other county officials were expecting to hear about the framework for reopening indoor businesses from the state by Monday.

``That doesn't mean we'll be able to open everything all at once,'' he said Wednesday. ``We must be mindful. We don't want to undo the progress we've made so far.''

The county will be placed back on the list should it be flagged for exceeding any one of six different metrics for three consecutive days. Those metrics are the case rate, the percentage of positive tests, the average number of tests a county is able to perform daily, changes in the number of hospitalized patients and the percentage of ventilators and intensive care beds available.

On Monday, county-compiled data related to race and ethnicity on testing, staffing and geographic location will be made available for the first time. Previously, data on race had been broken down by deaths, hospitalizations and case numbers only.

Latinos are still disproportionately impacted by COVID-19, with that ethnic group representing 61.7% of all hospitalizations and 46% of all deaths due to the illness. Latinos make up about 35% of San Diego County's population.

``There is no city better than San Diego to take advantage of the fact that COVID-19 has a harder time spreading outdoors. Using parks as part of our pandemic relief response will help the mental health and physical health of thousands of San Diegans,'' Faulconer said.