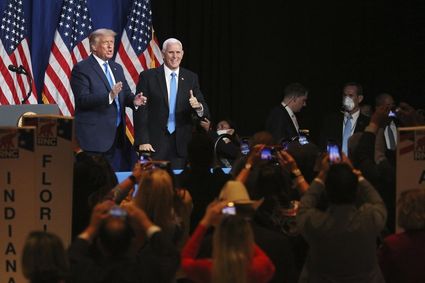 President Donald Trump and Vice President Mike Pence give a thumbs-up after speaking during the first day of the Republican National Convention Monday, Aug. 24, in Charlotte, North Carolina.

As Trump faces pressure to expand his appeal beyond his loyal supporters, Sen. Tim Scott of South Carolina, the Senate's sole Black Republican, and former U.N. Ambassador Nikki Haley, the daughter of Indian immigrants, sought to cast the Republican Party as welcoming to Americans of color, The Associated Press said.

"I was a brown girl in a black and white world," Haley said Monday night, noting th...