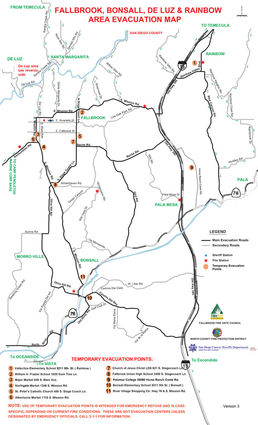 The 2018 version of the Fallbrook Firesafe Council's Fallbrook Evacuation Map is reprinted here. The map shows evacuation routes out of Fallbrook and De Luz.

California is wildfire country, and October is peak wildfire season.

The Rice fire, which burned more than 9,000 acres and destroyed more than 200 structures in the Fallbrook area in 2007, broke out in late October. So this time of year is certainly a time to be mindful of fire danger, especially in Fallbrook, which finds itself especially vulnerable to fires as a result of being surrounded by wildlands and with few roads in or out.

2020 has already been a deadly and destructive year for wildfires in California. Firefighters have battled more than 8,000 wildfires in the state so far this ye...