Nonprofits team up for support during evacuations 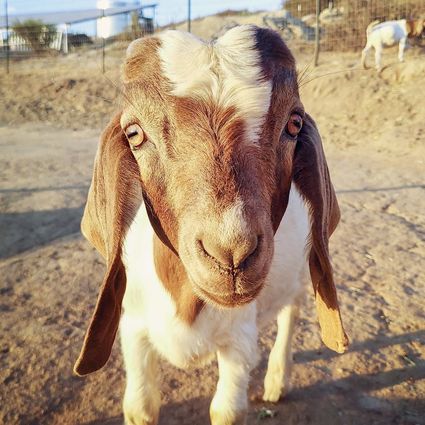 With fires on the rise, Sale Ranch Animal Sanctuary in Temecula worked on a fire evacuation plan for their animals that includes support for surrounding communities including Fallbrook.

The nonprofit sanctuary works to provide homes for animals that have been abused, neglected or need medical care and has many different animals: horses, donkeys, goats, sheep, rescue dogs, pigs and turkeys, just to name a few.

Jaime Lee Purinton, a board member and volunteer, helped to create the evacuation plan. She has worked with Sale Ranch Animal Sanctuary since 2016 and has lived in Fallbrook for 11 years.

"Originally, the county fire department came out and said that we were perfect to shelter-in-place because we have so much clearance at the ranch," Purinton said. "With the rise of fires lately, we've noticed they're a lot bigger and they're just a lot scarier, so we went back to the fire department again this year and they said you're still probably good to shelter-in-place but have an evacuation plan just in case."

One of the things they talked about while creating the plan was that they were surrounded by quite a few other ranches, she said.

"Those people were on our volunteer list for evacuation, but we came to realize that they probably are going to be evacuating their own animals, so that's kind of why we're reaching out to other areas," Purinton said. "You've got Fallbrook, De Luz, people in Murrieta, people in Winchester, that we can call on to come out and help if the fire's local to us, hopefully they'll be safe so that they can leave their animals to come help us."

They put together a full fire evacuation plan.

The sanctuary is fundraising to purchase some equipment.

"We want to be able to not only get ourselves out, but let's say there's a fire in Fallbrook and we can help ranches here," Purinton said. "So we have a fundraiser to buy another trailer, and we're trying to get another farm truck donated and more portable pens as well, so that people from Fallbrook, if they need a place to go, they can come to the ranch and we can set up portable stalls for their animals."

When it comes to loading, Purinton said they would try to load the easier animals first.

"The horses, the donkeys, they're all trained. We practice with them, so in an emergency, we know that they're gonna load," Purinton said. "The other animals like the cows and the full-size pigs, the farm pigs, they're a little bit tougher so they would probably be the second to load."

There's also a lot of smaller animals, she said.

"All the goats and sheep and chickens and dogs and everything, we have crates for all of them, and everybody's been practicing with getting them in the crates," Purinton said. "They've been pretty much raised since babies, really hands on so they're not scared of people or anything so they should be able to just load right into the crates."

"All of our horses, our equines are 100% ready to hop in a trailer at a moment's notice," she said. "We also have some goats and pigs – they would probably take a little more assistance."

Layton said that they have a three-horse trailer.

"Basically, if they ever need us in an emergency situation or even like a warning evacuation type of situation for fire, anything like that going on, then we would be able to go out there and support them and help them pick up animals."

Layton said that it was nice to be partnering with others in the area.

"If we got stuck in a situation on this side of town where we had to evacuate," Layton said. "We would put in the call to them for some help also."